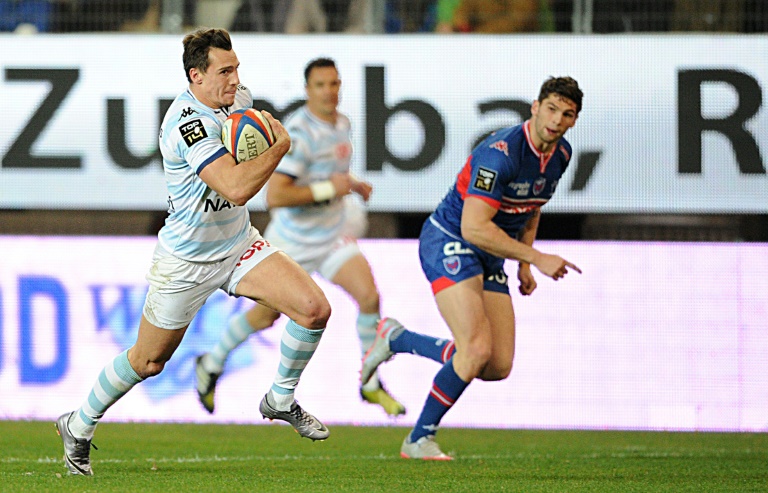 Racing 92 pulled five points clear in the French Top 14 with a thrilling 39-35 win at Grenoble on Saturday, as Toulouse slumped to a 28-8 defeat to La Rochelle.

Five-try Racing extended their advantage at the summit with a bonus-point triumph, as late tries from Xavier Chauveau and Joe Rokocoko broke Grenoble’s stubborn resistance.

A 28-17 victory over Castres puts Clermont level with Toulouse in second, who were humbled by La Rochelle later in the day.

It was the first action in the Top 14 in three weeks, with the opening two rounds of the Six Nations having taken centre stage.

France coach Guy Noves would have been casting a nervous eye over the weekend’s games, with several of his players in action just days before the crucial Six Nations clash with Wales in Cardiff on Friday.

He was dealt a blow at Grenoble as Racing winger Teddy Thomas hobbled off in the 22nd minute with a hamstring strain, with his coach Laurent Labit confirming he would miss the game at the Principality Stadium.

Just three minutes before that Thomas had run in a second Racing try to put them in control after Antonie Claasen had crossed early on.

Argentina back Juan Imhoff grabbed a third inside the first half an hour, all of which were converted by World Rugby Player of the Year Dan Carter.

Grenoble hit back though with quickfire scores from Loick Jammes and James Percival before the break, with the reliable boot of Jonathan Wisniewski giving them a five-point half-time lead.

Fly-half Wisniewski took his points tally for the evening to 25 points with three penalties as the home side closed in on a third successive victory.

But replacement Chauveau touched down to give Racing hope, and 32-year-old wing Rokocoko cut the gap to just one point with nine minutes left.

His fellow former All Black Carter slotted over the resulting conversion to snatch a win that he wrapped up with a last minute penalty.

Clermont were eager to get back to winning ways earlier in the day after a run of poor results and they were well on top in the first half at the Stade Pierre-Antoine.

South African winger Flip Van Der Merwe opened the scoring with a try in the corner after 13 minutes and it was veteran fly-half Brock James who made it 13-0 with two penalties.

It was a vastly different story at the start of the second half with Castres launching an offensive that ended with Remi Lamerat squeezing over for a try that Benjamin Urdapillet converted from near the touchline.

James kept Clermont clear with another penalty after 55 minutes, but an interception try from the halfway line from Samoa winger David Smith made it 16-14 and Castres went ahead for the first time shortly after with a penalty from Urdapillet.

But it was the visiting side that finished the stronger with tries in the last six minutes from James and SÃ©bastien Vahaamahina settling the issue.

Going into late kick-off at the Stade Marcel-Deflandre, Toulouse knew only five points of their own would move them back level with Racing.

But a nightmare first half put paid to those hopes, as an eighth minute Romana Graham try and five penalties from Zack Holmes gave La Rochelle a massive lead.

Toulouse briefly threatened a comeback when Samoan wing Paul Perez finally broke through, but the boot of Holmes kept the scoreboard ticking and Toulouse at arm’s length.

The Australian fly-half finished with 23 points, kicking La Rochelle to a sixth win in seven home matches this season.

Bordeaux strengthened their hold on a play-off spot by beating Agen 24-19, while a last-gasp Colin Slade penalty saw Pau past Montpellier 19-16.

On Friday, reigning champions Stade Francais kept alive their fading hopes of retaining the title with a crucial 32-17 win at home to Brive.