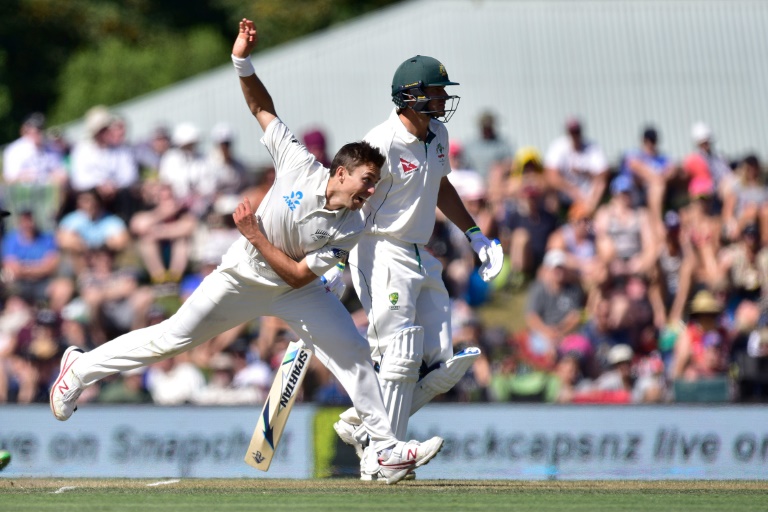 Century-makers Joe Burns and Steve Smith shredded the New Zealand attack to have Australia in charge of the second Test, before both fell in the dying stages of day two in Christchurch on Sunday.

After Brendon McCullum’s 145-run blitz gave New Zealand the first day honours on a green, seaming wicket, Burns and his captain Smith ensured the momentum swung Australia’s way as the pitch flattened out.

Burns spent a lot of time successfully fighting off Neil Wagner’s short-ball tactic before eventually pulling one to Martin Guptill at square leg with 28 balls left in the day.

Adam Voges was on two with Nathan Lyon, sent in as nightwatchman, on four.

Until Smith’s dismissal, the only moment of concern in his classy innings came when he was felled by a fearsome Wagner bouncer in the last over before tea.

He lay prone on the ground for a few moments, but as the New Zealand players rushed to his aid, Smith staggered to his feet and after medical attention he resumed his innings with a single off the next ball.

Burns spent 434 minutes in the middle from the start of the Australian innings and in a patient stand easily eclipsed his previous Test best of 129, also against New Zealand, in Brisbane last November.

He received a vital reprieve after he was given out, caught behind for 35, only for the umpire’s decision to be overturned when replays showed the ball had glanced off his arm and not the glove.

Matt Henry was handed the second new ball ahead of Tim Southee and whipped down six aggressive overs which appeared to extract new life out of the wicket.

His third delivery with the new ball jagged back enough to beat Burns down the leg side and race to the boundary for four byes, the first extras in the innings.

Another delivery sailed over Burns’ stumps.

But like Wagner and his fired-up spell in the dying overs with the old ball, he was left frustrated by an inability to find an edge that would reach the cordon behind the stumps.

After Australia resumed the day at 57-1, they added 306 for the loss of three wickets with Usman Khawaja the first to go.

New Zealand quicks Trent Boult, Southee and Henry had the better of the exchanges at the start of the day.

Boult put an added spring in the step of the New Zealanders with the valuable wicket of Khawaja for 24, caught low down by McCullum at first slip.

Boult had removed David Warner on the first day with a similar delivery.

The Khawaja wicket brought Smith and Burns together and after a cautious first hour, they upped the tempo as the life drained from the New Zealand attack.

McCullum used every trick in his playbook from short-pitched bowling, to the leg theory, to part-time spinner Kane Williamson, before Wagner’s late breakthrough.