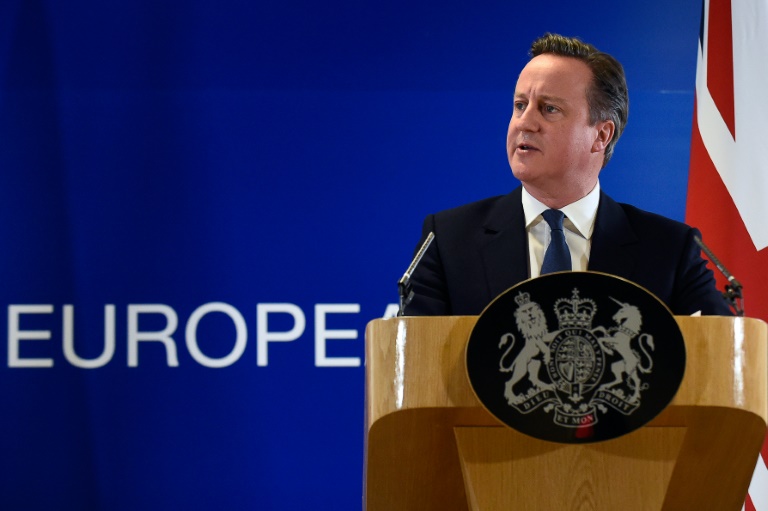 British Prime Minister David Cameron on Friday sealed a deal for “special status” in the EU after a marathon summit, paving the way for him to campaign to stay in the bloc in a historic referendum.

The unanimous agreement came after two days and nights of intense negotiations in Brussels, with Cameron overcoming dogged opposition among other European leaders on all the major reforms he sought.

But Cameron must immediately embark on the difficult process of selling the deal at home to eurosceptic members of his own party and a hostile press ahead of the referendum, expected on June 23.

Lithuanian President Dalia Grybauskaite, the first to break the news of the agreement, meanwhile tweeted “Drama over.”

Yet the drama is only just beginning for Conservative leader.

He will now have to start campaigning in earnest ahead of the referendum — at the head of the “In” campaign.

“I’ve negotiated a deal to give the UK special status in the European Union,” Cameron said

“I believe that this is enough to recommend that the UK remain in the EU having the best of both worlds.”

He said Britain would now be “permanently out of ever closer union”, one of the EU’s founding principles, while Britain would be able to apply “tough new restrictions on access to welfare.”

Cameron is now expected to return to London where, after a cabinet meeting at 0900 GMT on Saturday, the referendum campaign will whirr into life as ministers who want Britain to leave will be allowed to speak out for the first time.

Opinion polls suggest the British public is finely balanced on whether to back a Brexit.

The deal was reached late on Friday after the EU’s two top figures,Tusk and Jean-Claude Juncker, presented its 28 leaders with draft proposals at a long-delayed dinner.

It came after France, Belgium and eastern European countries dug in their heels over changes to areas including regulation for non-eurozone countries and benefit payments to EU migrants for four years.

French President Francois Hollande had earlier said he would “do what was needed” to keep Britain in Europe, while German Chancellor Angela Merkel had been broadly supportive.

Eastern European countries were concerned that his benefit plans were discriminatory and violated the EU principle of freedom of movement.

Brussels offered an “emergency brake” which Britain could invoke for a limited period if its welfare system is overwhelmed by the inflow of workers, as it believes it has been.

Cameron, who was re-elected in May, had said that without a satisfactory agreement, he would campaign for Britain to stay in the EU in a referendum and was prepared to walk away from the summit.

With the EU negotiation out of the way, domestic politics are set to cause him fresh headaches as key allies including London Mayor Boris Johnson make up their minds whether to support Cameron in urging Britons to stay or join the leave side.

One of his closest allies, Michael Gove, has already reportedly made up his mind to campaign for Brexit.

On Monday, Cameron’s government is expected to table measures in the Houses of Parliament to set the date of the poll.

This will be Britain’s second referendum on European membership in just over 30 years — in June 1975, voters backed membership of the then European Economic Community (EEC) by just over 67 percent.

However, that failed to prevent years of divisive quarrelling about Britain’s role in membership in the Conservative party, now led by Cameron.

It was this, fuelled by a surge in support for the anti-EU UK Independence Party led by Nigel Farage, which first prompted him in 2013 to promise a referendum.