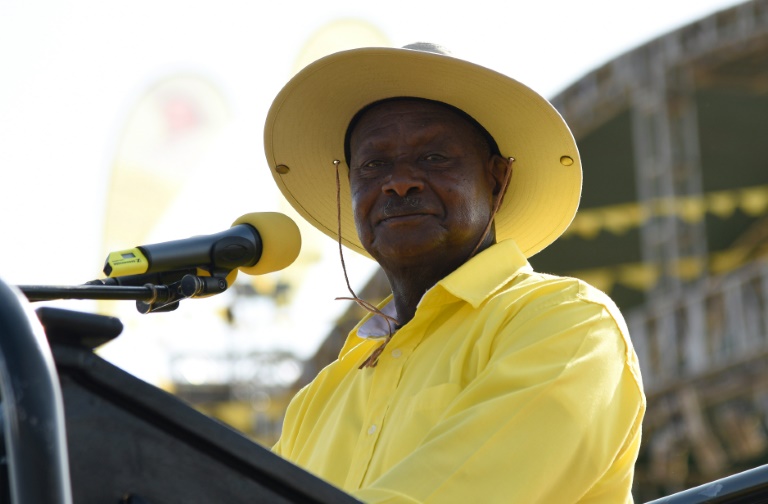 Uganda’s President Yoweri Museveni extended his three-decade rule on Saturday, after winning a fifth term in polls rejected as fraudulent by the opposition leader under house arrest.

The veteran 71-year-old won 60 percent of the vote in the sometimes chaotic elections, far ahead of the 35 percent garnered by detained opposition chief Kizza Besigye, whose house was surrounded by dozens of armed police in riot gear.

Large numbers of police and troops have been deployed, with the streets of the capital Kampala appearing calm immediately after the widely expected victory for Museveni was declared. US Secretary of State John Kerry on Friday had urged Museveni to “rein in” his security forces.

In a message to the international community, Besigye said: “Should you ratify the results of these sham elections, at least have the courage to admit that you do not care about democracy or human rights in Africa.”

“The outcome of an elections can either tear or build a country… as Ugandans let us be prepared to exhibit more tolerance,” Election Commission chief Badru Kiggundu said shortly before declaring Museveni the winner. “We love this country and you Ugandans love your country.”

“The result confirmed that our opponents failed to offer any alternative,” NRM spokesman Mike Sebalu said. “Behind their vague claims of change, there were no policies and no chance of progress — and people saw through these empty claims.”

Although Museveni was re-elected as president, at least 19 of his ministers lost their parliamentary seats, among them defence minister Crispus Kiyonga — who is spearheading regional efforts to end the political crisis in Burundi — and attorney general Fred Ruhindi.

Some 9.7 million Ugandans voted — a turnout of around 63 percent — for president and members of parliament, with 290 assembly seats contested by candidates from 29 political parties.

Museveni and Besigye, 59, were once close. They fought together in a bush war to overthrow Uganda’s first post-independence leader Milton Obote. During that time, Besigye served as Museveni’s personal physician.

This was Besigye’s fourth attempt to unseat his former comrade-in-arms, his best performance so far being in 2006 when he polled 37 percent.

“To my fellow Ugandans… remain vigilant and steadfast. The struggle is long and hard but, in the end, we shall win if we continue in our patient and steadfast resolve,” Besigye said in a statement.

“The regime cannot survive without our co-operation. Let us denounce this electoral theft by withdrawing our recognition of the regime and ceasing to co-operate with it.”

The election on Thursday was disrupted in Kampala by the late arrival of ballot boxes and papers and angry demonstrations by voters that the police quelled using tear gas.

At nearly 28,000 other polling centres voting passed off smoothly, but the ballot was extended for a second day in 36 places after delays that Commonwealth election observers called “inexcusable” and that “seriously detracted from the fairness and credibility of the result.”

European Union election observers on Saturday said that “voting was conducted in a calm and peaceful environment in the vast majority of the country”.

But the observers also voiced criticism over the “lack of transparency and independence” of the electoral commission.

Besigye, who was arrested during campaigning on Monday and again on Thursday evening, was taken into custody for a third time on Friday.

Police had stormed Besigye’s Forum for Democratic Change (FDC) headquarters on Friday to arrest him, saying they wanted to prevent him from unilaterally proclaiming his vote score.