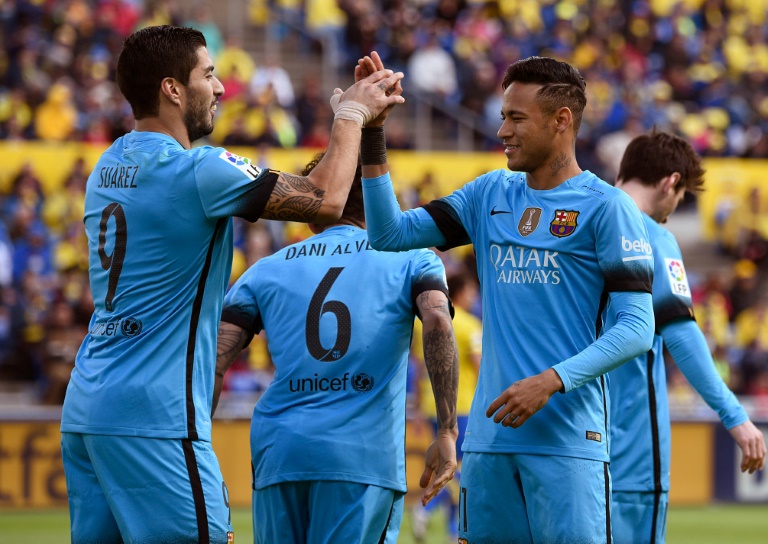 Barcelona moved nine points clear at the top of La Liga thanks to first-half goals from Luis Suarez and Neymar despite an unconvincing display in a 2-1 win at Las Palmas on Saturday.

Suarez opened the scoring early on with his 41st goal of the season, but Willian Jose deservedly levelled for the hosts inside 10 minutes.

Neymar restored the lead from close range before the break, but the European champions had to withstand a late onslaught from the Canary Islanders to stretch their unbeaten run in all competitions to 32 games.

Barca’s closest challengers Atletico Madrid can cut the gap when they host fourth-placed Villarreal, whilst Real Madrid, who are now 10 points adrift of Barca, travel to Malaga on Sunday.

Despite facing Arsenal in the Champions League on Tuesday, Barcelona boss Luis Enrique rested only Gerard Pique, whilst Sergio Busquets was also suspended from the side that is expected to start at the Emirates.

The star trio of Lionel Messi, Suarez and Neymar started once more and bore fruit after just six minutes as Suarez extended his lead over Cristiano Ronaldo as La Liga’s top scorer with his 25th Liga goal of the campaign.

Andres Iniesta’s perfectly weighted pass freed Jordi Alba down the left and his low cross was fired into the roof of the net by Suarez at the back post.

However, just as in their win at Sporting Gijon in midweek, Barca conceded minutes after scoring the opener as Jonthan Viera’s brilliant backheel teed up Jose to drive home the equaliser.

Unlike the majority of Barca’s opponents, Las Palmas were determined to take the game to the visitors, but in doing so left themselves exposed at the back against the most feared attacking trio in the world.

However, the former Liverpool striker redeemed himself with brilliant play down the right in the build-up to Barca’s second as from his cutback Varas again denied Messi, but the ball fell perfectly for Neymar to slam home the rebound.

Suarez had a golden chance to put the game to bed after the break as Varas made another remarkable save from point-blank range after a great knockdown by Dani Alves.

And with Barca tiring in the final quarter, Las Palmas had a host of chances to snatch a point.

Firstly, Claudio Bravo flew to his left to parry Viera’s effort before Jose fired into the side-netting.

Sergio Araujo came closest to an equaliser when his shot across Bravo flew inches past the far post and the Argentine had another great chance a minute from time when he couldn’t divert a loose ball inside the are on target with Bravo flapping.

However, it was Barca who should have set the seal on an eighth consecutive league win when Neymar fired straight at Varas with just the ‘keeper to beat in stoppage time.