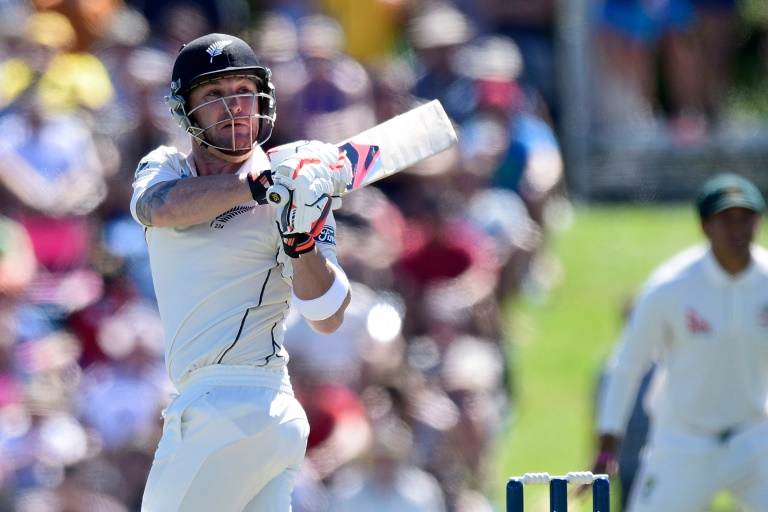 Brendon McCullum peppered the boundary at his audacious best and smacked a world record 101st six in an attempt to bat New Zealand out of trouble on the opening day of the second Test against Australia on Saturday.

At lunch New Zealand were 74-3 after being 32-3 when McCullum, who retires after the match, walked to the middle to a standing ovation from the crowd and a guard of honour from the Australians at his home ground of Hagley Oval in Christchurch.

McCullum was not out 37 off 18 deliveries at the end of the first session, in contrast to Kane Williamson on seven off 64 after New Zealand lost the toss and were sent in to bat on a green seamer.

Under a blazing sun, McCullum lived up to his fearless reputation with an aggressive start, beaten by the seam swinging at the first ball he faced and taking a big heave at the next which he edged over slips for four.

On the fifth ball he faced he hit Mitchell Marsh over the bowler’s head for six to reach 101 and topple Australian Adam Gilchrist with the most Test cricket sixes.

His 37 included five fours and two sixes, but until McCullum began his onslaught New Zealand were in trouble.

Martin Guptill used the attack method and after living dangerously through the first six overs he was gone for 18, caught by Joe Burns diving forward at short leg.

James Pattinson had a ball nip back and it caught the outside edge of Guptill’s bat.

Burns had previously dropped Guptill on 11 from a similar Pattinson delivery in an over where an edge fell just short of slips and a lofted drive sailed close to mid-on.

When Williamson joined Tom Latham the pair were all concentration producing only two runs in 52 deliveries before Latham was caught one-handed by a diving Steve Smith at second slip off.

Henry Nicholls, who put up stubbon resistance for 59 in his debut innings last week, lasted 12 balls before he fell leg before wicket to Josh Hazlewood.

Australia need to win the Test and sweep the series to claim the world number one ranking.