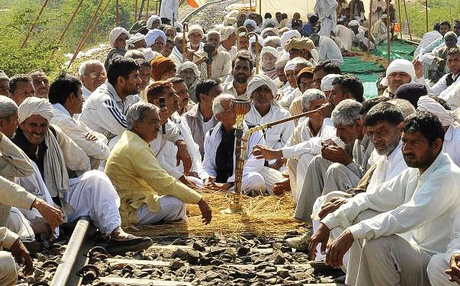 Chandigarh: It was the third day of Jat reservation clash in Haryana when four persons were killed on Saturday while several others were injured as security personnel opened fire during violent protests for quota by Jat community in Rohtak and Jhajjar districts, taking the toll to seven.

Clashes also broke out between non-Jats and protesters at a few places. “Two persons were brought dead in PGIMS here just an hour ago. One patient, who was critically injured, was operated upon but he died few minutes ago,” hospital authorities in Rohtak said today.

Among the four deceased, three were identified as Parveen (Jhajjar), Krishan (Jhajjar) and Nitin (Rohtak).

Around 14 patients with bullet injuries were brought for treatment here at PGIMS from Rohtak and Jhajjar districts.

The Jat stir had yesterday claimed life of one unidentified person killed in a BSF firing in Rohtak after agitation turned violent.

Meanwhile, in Hansi sub-division, two persons were injured in firing during a clash broke out between agitating Jats and non-Jats at Jaggabara village here, police said today.

The members from Jat community were staging a dharna in Mayyar village when someone used objectionable language to which the non-Jats objected, leading to a clash between the two groups.

Both were shifted to Hisar and admitted in a private hospital. The condition of both is stated to be out of danger, the police said.

A group of people belonging to Saini community pelted stones at some shops near Jat Dharamshala Hansi and set a wine shop on fire, police added.