Home Sports Napoli ‘alive and kicking’ ahead of Milan clash 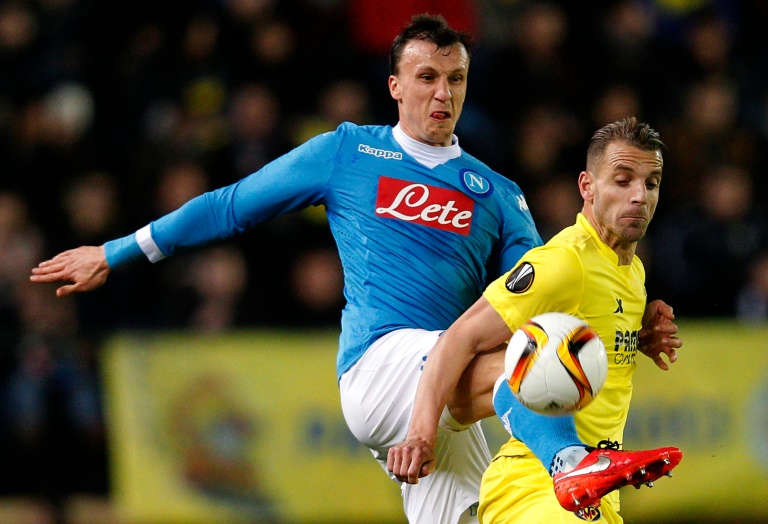 Napoli president Aurelio De Laurentiis said the title-chasers are “alive and kicking” as they look to stop Juventus opening up a four-point lead with a win against AC Milan this weekend.

Napoli, bidding for their first Serie A title in 26 years, slipped to second place at one point behind Juve after the latter’s 1-0 victory in Turin last week.

With the Bianconeri hosting Bayern Munich in the first leg of their Champions League last-16 tie on Tuesday, Massimiliano Allegri’s men have the luxury of meeting Bologna away on Friday.

A win at the Dall’Ara stadium would see the Old Lady stretch their lead to four points, and heap further pressure on Napoli before meeting a Milan side buoyed by a string of positive results of late.

But Napoli, who on Thursday lost 1-0 to Villarreal in the Europa League, have no intention of lamenting their loss to Juve, says De Laurentiis.

“We have to get over it, not cry about it,” De Laurentiis told Radio Kiss Kiss. “This is a defect we all have in the south (of Italy), we cry over things like there’s been a death. We are alive and kicking!”

Milan are unbeaten in nine outings in all competitions and visit the San Paolo looking for their fifth win in their past seven league games — two of which came against Fiorentina and Inter.

A 2-1 win over Genoa at the San Siro last week left Sinisa Mihajlovic’s men in sixth place and Milan are now only two points behind city rivals Inter, who host Sampdoria at the San Siro on Saturday.

Mihajlovic is set to be without Slovakian midfielder Juraj Kucka as he recovers from a muscle problem, but apart from a spat with Mario Balotelli last week has no major concerns.

Striker Carlos Bacca took his league goals tally for the season to 13, leading to speculation he could become Robert Lewandowski’s replacement at Bayern Munich if the Poland striker decides to quit the Bundesliga giants.

Bacca, however, said Thursday: “I’m happy here, I’ve got a five-year contract with the club and everything’s going fine.”

Asked about the trip to Napoli, he added: “It won’t be easy, either for us or them. We want a result, but it won’t be easy because although they got beat at Juventus, they’re second in the table and a very strong side.”

Balotelli is expected to start on the bench after angering Mihajlovic by failing to carry out instructions in a cameo appearance against Genoa, meaning M’Baye Niang should partner Bacca at the San Paolo.

Mihajlovic refused to single out Balotelli last week, but delivered a warning to all of his players when he said: “I’m not naming any names. All I can say is I made a mistake and that from now on, any player who doesn’t give it everything until the 94th minute of the game doesn’t play again.”

Although Napoli are widely expected to maintain their unbeaten home record on Monday, Inter will be watching proceedings closely after welcoming Sampdoria — and a few other notable guests — to the San Siro.

Reports on Thursday said Jose Mourinho, who steered the Nerazzurri to a historic treble of league, Cup and Champions League in 2010, will be a guest of the club alongside retired striker Ronaldo at the San Siro.

Inter have yet to confirm the reports but the presence of Mourinho, sacked from Chelsea in December, would give Mancini a timely reminder of his brief this season.

Inter, who are primarily targeting qualification for the Champions League, currently sit fifth at 12 points behind Juventus but only four behind third-placed Fiorentina.