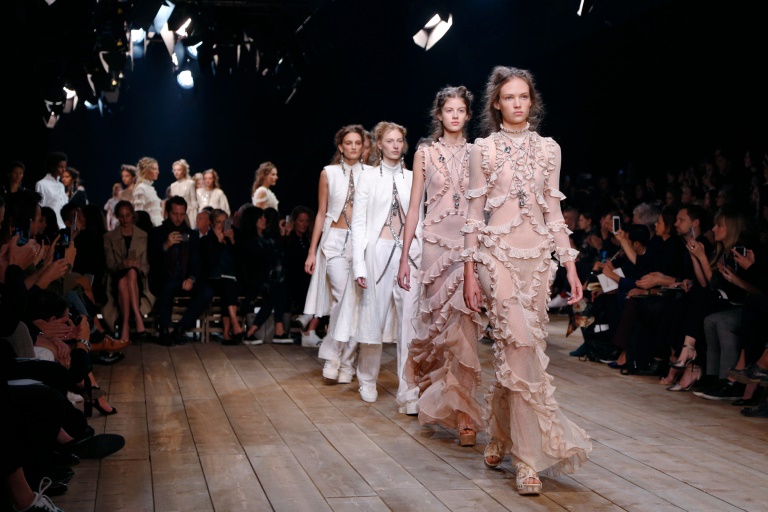 The international fashion jamboree rolls into Britain on Friday for London Fashion Week, where iconic label Alexander McQueen will return to the catwalk for the first time in over a decade.

British fashion and leather goods brand Mulberry, under the direction of new creative director Johnny Coca, will also make a return to the London catwalk for the first time since 2013.

Shows will be streamed live across Britain on 60 outdoor screens, including a giant one in London’s Piccadilly Circus, reaching a potential audience of 35 million, according to organisers.

Once the poor relation on the international fashion circuit, London has recently built a reputation for invention and creativity, buoyed by Britain’s growing fashion industry.

That rebellious spirit is set to be unleashed as designers mark the 40th anniversary of punk, which grew out of the London clothes shop run by Vivienne Westwood and her then boyfriend, Sex Pistols mastermind Malcolm McLaren. Punk’s grand dame is set to present her label’s latest collection on Sunday.

Westwood posted pictures of religious figures, knights and aristocratic paintings while others promised collections inspired by the British countryside, cubist paintings and birds in flight.

In a coup for the event, Alexander McQueen announced last year that it was relocating from Paris to London for its autumn/winter collection, and the show will take place on Sunday.

“We wanted to look at doing something different for the season,” said a spokesperson for the label.

Alexander McQueen himself, who committed suicide in 2010, was honoured last year with a retrospective at London’s V&A which went on to become the London design museum’s most visited exhibition of all time.

With the cars gone, the unusual venue will house hundreds of shoe, accessory and ready-to-wear designers displaying their new collections and a huge catwalk.

Other designers hire private spaces to put on their shows, with Burberry traditionally erecting a large tent within the grounds of Kensington Gardens.

The first London Fashion Week, held in 1971, was the brainchild of fashion PR guru Tony Porter, who thought it “ridiculous” that Paris and Milan hosted journalists and buyers twice a year, but that London didn’t.

The event follows on the heels of the New York version, with the fashion world shifting to Milan and then Paris next month.