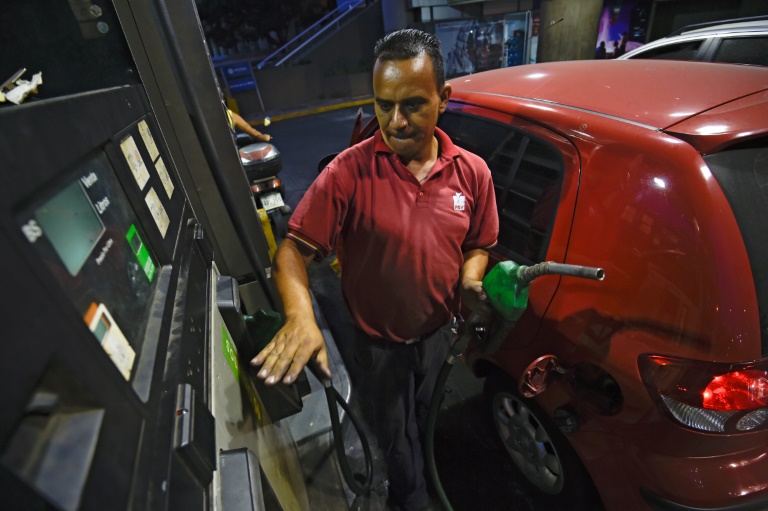 Venezuela’s President Nicolas Maduro ramped up gasoline prices for the first time in two decades, from $0.01 to $0.60 per liter, and devalued the bolivar currency in a bid to salvage the economy from crisis.

The oil giant’s socialist leader said the pump price of premium gasoline would jump from just under 0.1 bolivars per liter to six bolivars — an increase of roughly 6,000 percent from the current super-low level.

Under the new exchange rate gasoline will cost the equivalent of $0.60 per liter — still the cheapest fuel in the world.

Venezuela has the biggest known oil reserves in the world and has been practically giving gasoline away at the pump over recent years. But it has suffered from the plunge in world oil prices since mid-2014.

The move risks sparking protests in a volatile country where citizens are struggling with soaring inflation and shortages of basic goods such as cooking oil and toilet paper.

“This is a necessary action, for which I take responsibility,” Maduro said in a televised address.

“The time has come to establish a system that guarantees access to hydrocarbons at a fair price but that also guarantees the funding of investment in producing that gasoline.”

The current three-tier system of exchange rates will be slimmed down.

From Thursday there will be just two rates: a protected official rate for food and medicine imports and a parallel “floating” rate for other transactions.

Under the rate for food and medicine, the reference rate in the state-controlled economy, the bolivar will weaken by 37 percent from 6.3 to 10 bolivars to the dollar.

Under the other new rate the bolivar will be allowed to float freely on the open market. That prompted skepticism from some analysts.

“The key to the new system will be to see how many dollars get changed” at the new rates, said economist Miguel Angel Santos.

“The government does not have enough dollars to sell them at 200 bolivars, so it will not be able to meet demand at that rate.”

Until now the alternative rate was about 200 bolivars to the dollar, but on the black market the US unit costs nearly 1,000 bolivars.

Maduro admitted the system of currency controls introduced by his late mentor and predecessor Hugo Chavez was “worn out.”

Maduro hopes that by weakening the currency he will boost Venezuela’s exports by making them cheaper.

He said the move aimed to spur production in the recession-hit nation.

He is meanwhile hoping major oil producers will all agree to freeze their crude production to buoy up prices.

At a petrol station in Caracas, motorists and pump attendants were divided over the impact of the hike.

“This will make life harder for people. It is going to drive up inflation even more,” said Carlos Pena, an attendant.

“If we had a hard time doing business before, imagine what it will be like now.”

But one of his customers, Laure Garces, said: “It is absurd for a tank full of gasoline to cost less than a bottle of water.”

Maduro is under increasing political pressure over the crisis. The opposition-controlled legislature is trying to drive him from office.

Some analysts and politicians have warned of the risk of fresh violence in Venezuela, where 43 people died during street protests in 2014.

“Now the Chavists and the opposition are going to kill each other for the little food that they can buy after this,” said Rafael Montilla, another pump attendant.