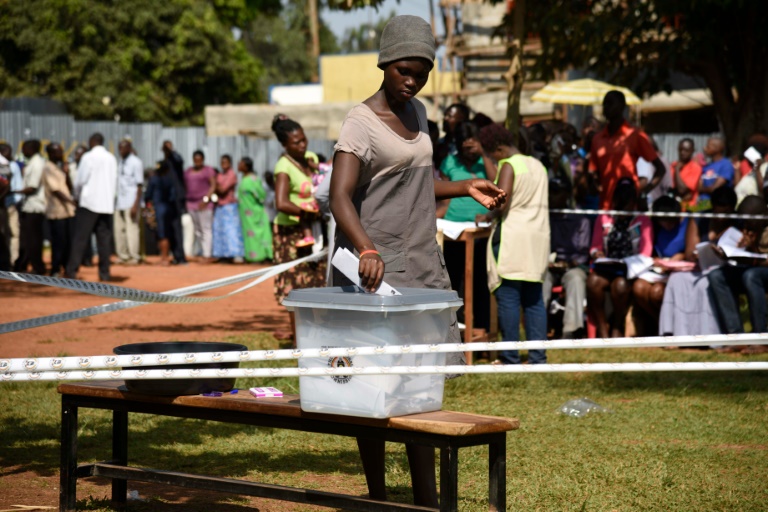 Besigye’s Forum for Democratic Change (FDC) party said he was detained after checking on reports of an illegal tally centre in his home district manned by the ruling National Resistance Movement party.

“He walked in and saw them pre-ticking ballot papers. They arrested him and took him to an unknown place,” said senior FDC official Shawn Mubiru.

There was no immediate police confirmation, but Besigye has been repeatedly detained by police in the past, and is commonly released without charge hours later.

International election observers meanwhile warned that hours-long delays in delivering ballot papers in the national polls would not “inspire trust”, with some frustrated voters and the opposition accusing the authorities of deliberately stalling the vote.

Voting in Uganda’s presidential and parliamentary polls failed to begin for several hours in some polling stations in parts of the city and the surrounding Wakiso district, where ballot boxes and papers did not arrive on time.

The capital traditionally shows strong support for the opposition.

“A delay of an hour or two is excusable. Delays of three, four, five and even six hours, especially in Kampala, are absolutely inexcusable and will not inspire trust and confidence in the system and the process,” Olusegun Obasanjo, the head of the Commonwealth Observer Group in Uganda, told AFP.

President Yoweri Museveni faces a challenge from seven candidates, but is widely predicted to win a fifth term, with the ex-rebel fighter who seized power in 1986 entering his fourth decade in power.

After casting his vote in the west of the country the 71-year old incumbent said he was going to have a rest. “I have not been sleeping,” he said. “Tomorrow I will go for my cross-country walk to exercise and then go to my cows.”

He added that anyone threatening election violence would be “put in the freezer” to cool down.

Ballot counting began even while others still queued to vote in the capital, with polls closing around nightfall.

“People are quite angry and everybody is believing that there is something wrong behind this because of the way they are delaying things,” said Moses Omony, a motorbike taxi driver.

“We know this has been done intentionally,” said Marius Nkata, a builder.

The election commission earlier said it “regrets” delays in some areas and appealed for calm, but opposition leader Amama Mbabazi, a former prime minister and ruling party stalwart, condemned the body.

“We fear that developments are intentional and deliberate, as there are no justifiable reasons to explain delays,” read a statement released by Mbabazi’s chief of staff, Solome Nakaweesi.

“The fact that voting began so late and some voters may be disenfranchised, questions whether this will be a credible and meaningful election.”

It added the party was “disturbed by the failure of the Electoral Commission to act timely and decisively in the face of these irregularities”, including the delays in the wider Kampala district, as well as of reports of “pre-ticked ballots” in favour of Museveni and candidates from his NRM party.

In turn, the NRM said claims of pre-ticked ballots were “unsubstantiated and without foundation”, while calling the number of stations registering delays “isolated.”

The strongest among Museveni’s seven challengers is Besigye, 59, who is making his fourth run at the presidency and ended his campaign by claiming the election would be neither free nor fair.

Over 15 million Ugandans were registered to vote, casting ballots in more than 28,000 polling stations for both a president and members of parliament, with 290 seats being contested by candidates from 29 political parties.

More than 150,000 police, soldiers and other security forces have been deployed to ensure tight security, according to election officials.

The Electoral Commission said all those standing in line when polls were due to close at 4:00 pm (1300 GMT) would be permitted to vote and that polling centres where materials were delivered late would stay open until 7:00 pm (1600 GMT).

Initial results are expected as early as Saturday afternoon with the leading candidate requiring more than 50 percent of votes cast to avoid a second round run-off.