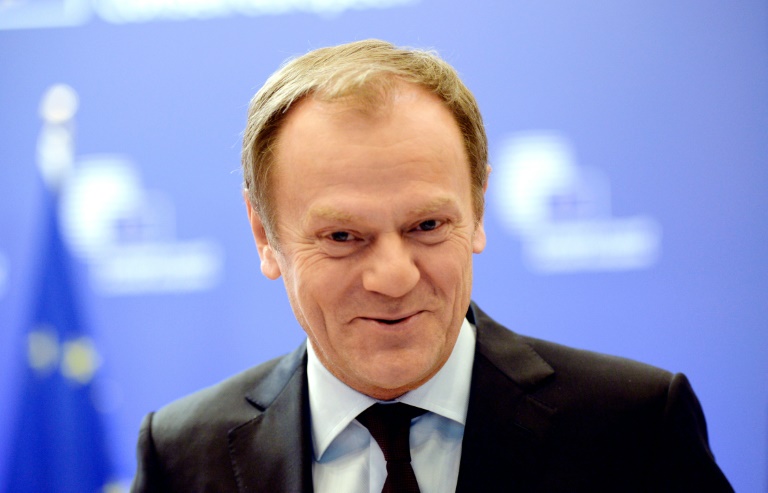 European Council head Donald Tusk warned Wednesday ahead of a key summit there was “no guarantee” EU leaders would reach a deal to keep Britain in the bloc as German Chancellor Angela Merkel backed London’s demands for reform.

Only hours before the make-or-break summit in Brussels which he will chair, Tusk said: “After my consultations in the last hours I have to state frankly — there is still no guarantee that we will reach an agreement.”

“We differ on some political issues and I am fully aware that it will be difficult to overcome them. Therefore I urge you to remain constructive,” he said in a formal letter of invitation to the EU’s 28 leaders for the two-day parlay starting Thursday.

Merkel earlier threw her weight behind Prime Minister David Cameron’s reform demands, saying Germany shared many of his concerns and had done so for years.

“These are not just about Britain’s individual interests on some issues or questions, rather it is about several points that are justified and understandable,” she told parliament in Berlin.

Cameron has four key demands — welfare restrictions to help curb immigration, safeguards for non-euro Britain, increasing competitiveness plus an opt-out from closer EU integration — and they have all exposed sharp differences over what direction the European Union should take.

Up to now, Merkel, the EU’s undoubted power-broker, has offered support with the caveat that any changes must not compromise fundamental EU values and achievements, such as free movement of people.

“Like David Cameron, I believe that it is necessary for the EU to improve our competitiveness, transparency and (reduce) bureaucracy. Germany has shared these concerns for many years,” she said.

Even the controversial proposal to curb benefits is “justified and understandable because the jurisdiction for each respective social system lies not in Brussels but in each individual member state,” she said.

“Therefore, it is only natural for every member state to be able to protect its social system against abuse.”

Cameron has promised Britons an in-out EU membership referendum by 2017 but it is widely expected that if he can get a deal in Brussels, he will call the vote for June.

Fail, however, and he has said anything is possible, including Britain becoming the first country to leave a bloc which critics believe is heading towards becoming a super-state, instead of the cooperative collection of independent sovereign countries they want to see.

The key sticking point is Cameron’s demand that EU citizens working in Britain not be allowed to claim welfare benefits for four years.

Brussels has offered an “emergency brake” which Britain could invoke if its welfare system is overwhelmed by the inflow of workers, as it says it has been.

Cameron says these changes are essential to give London control over immigration but Poland and other east European states who have hundreds of thousands of workers in Britain say it will discriminate against them and undercut the EU’s core principle of freedom of movement.

Tusk in his letter said the “negotiations are very advanced and we must make use of the momentum.”

“There will not be a better time for a compromise.”

Diplomatic sources said the summit could be difficult and argumentative.

Asked which of Cameron’s demands was most contentious, the source said: “It is too difficult to say which one is the most difficult!”

Merkel also reminded her EU peers they must tackle a migrant crisis which has seen one million refugees and more, mostly fleeing the war in Syria, come to Europe via Turkey and Greece which has been overwhelmed by the numbers.

Germany has taken in most and Merkel insists Europe must welcome more, if no longer with open arms at least with a charitable attitude.

Others such as Austria, Hungary and their Balkan neighbours have reintroduced border controls to control the influx, jeopardising the passport-free Schengen zone which gives effect to the principle of free movement.

Merkel is under heavy domestic pressure to reduce arrivals and so supports a plan under which Turkey would seal its borders and then fly refugees to Europe to be settled under an EU quota system.

“We will speak at the upcoming (summit) about how we can work together to protect our external border and I want us to work together on the EU-Turkish agenda that 28 members have decided”.