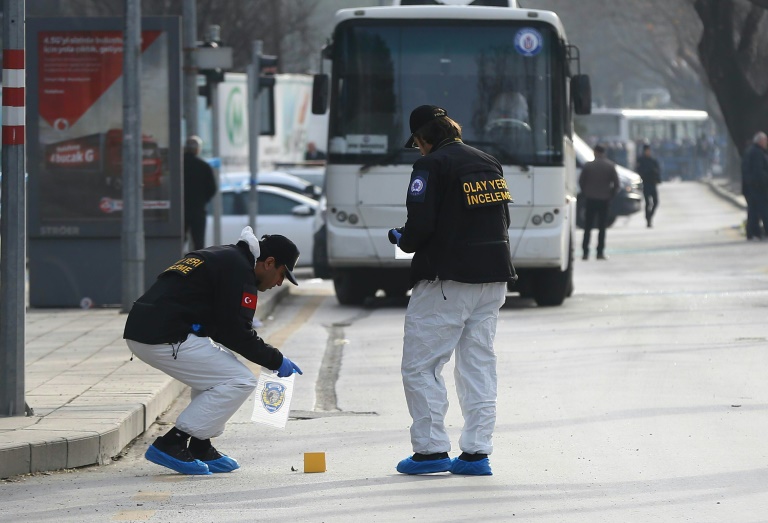 Turkey on Thursday blamed Kurdish militants for a car bombing targeting a military convoy in Ankara that left 28 people dead, in an attack likely to further increase tensions in neighbouring Syria.

The massive bomb blast struck five buses carrying military service personnel when it stopped at a traffic light in the centre of the capital on Wednesday evening. Sixty-one people were wounded.

It was latest in a string of deadly strikes that have rocked Turkey since last summer and one of the deadliest assaults targeting the military in the NATO member state in recent years.

Also Thursday, at least six soldiers were killed in an attack on their convoy in southeastern Turkey blamed on Kurdish militants, security sources said.

Prime Minister Ahmet Davutoglu and President Recep Tayyip Erdogan both said the Ankara attack was carried out by operatives of the outlawed Kurdistan Workers’ Party (PKK) in cooperation with the Syrian Kurdish People’s Protection Units (YPG).

“It has with certainty been revealed that this attack was carried out by members of the terrorist organisation in Turkey in cooperation with a YPG member who infiltrated from Syria,” Davutoglu told reporters.

He said the bomber was a Syrian national named Salih Necar.

Erdogan said 14 people had been detained in nationwide raids across Turkey and that the number was likely to rise.

Police had identified the bomber from fingerprints taken from refugees who crossed the border to escape the war in Syria, the pro-government Yeni Safak said.

The attack struck the heart of power in the Turkish capital in an area where the headquarters of the army, the parliament and prime minister’s offices are in close proximity.

Pictures showed at least two of the vehicles reduced to burnt-out wrecks, and the massive blast was heard from all over the city, causing panic among locals.

Davutoglu said 27 of the dead were members of the military and one was a civilian. Reports said she was Gulsen Yildiz, a journalist specialising in agriculture.

Hours after the attack, Turkey’s air force launched new strikes on PKK targets in northern Iraq, acting on intelligence that there were dozens of fighters including top rebel leaders in the area, the army said.

Davutoglu said 70 fighters had been killed in the strikes.

The YPG and its political wing the Democratic Union Party (PYD) deny being PKK branches and argue they have no interest in attacking Turkey.

PYD head Saleh Muslim rejected any responsibility for the Ankara blast, telling AFP the group had “never heard of this person Salih Necar”.

Turkey considers both the PKK and YPG to be terror groups, in contrast to the United States which only classifies the PKK as a terror organisation and works closely with the YPG as an effective force fighting Islamic State jihadists in Syria.

“This process will help our friends — who we could not convince so far — better understand how strong the links are between the PYD and YPG in northern Syria with the PKK in Turkey,” said Erdogan.

Turkey has for five consecutive days shelled Syrian Kurdish targets inside Syria, saying the military was responding to incoming fire.

Davutoglu vowed to make the culprits “pay a price,” saying Turkey would take any kind of measure on its border including self-defence.

Turkey fears the Syrian Kurds want to carve out an autonomous region across the border in northern Syria stretching from the Iraqi border almost to the Mediterranean.

Ankara is concerned the Kurds will now take a “corridor” east of the flashpoint border town of Azaz — currently still in control of rebels — to link up two Kurdish-held areas.

A monitoring group said at least 500 rebels on Wednesday crossed the Turkish border heading for Azaz.

“They want to help the insurgents in the face of gains made by Kurdish forces in the north of the province,” the Britain-based Syrian Observatory for Human Rights said.

Meanwhile, strikes by a US-led coalition against the Islamic State group killed at least 15 civilians, including three children, in northeastern Syria on Thursday, it added.

Ankara was already on alert after 103 people were killed on October 10 when two suicide bomber linked to IS blew themselves up in a crowd of peace activists, the bloodiest attack in the country’s modern history.

Turkey has in the last months waged an all-out assault on the PKK, which has repeatedly attacked members of the security forces with roadside bombings on their convoys in the southeast.

The PKK launched an insurgency against the Turkish state in 1984, initially fighting for Kurdish independence although now more for greater autonomy and rights for the country’s largest ethnic minority.