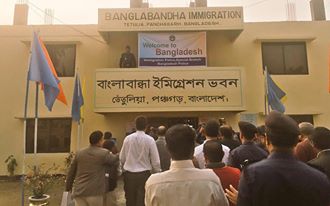 The Phulbari-Banglabandhu Immigration Checkpost was opened on Thursday to make it the movement between Bangladesh and India easier.

The immigration checkpost will also act as a gateway to the Nort-East of India, Nepal and Bhutan. Another aspect of opening the post was to promote tourism between the two countries. It will contribute to the progress of and development of North Bengal and Northern Bangladesh.

Singh said that the Bangladeshis should explore “the unexplored treasure of great natural beauty and business opportunities” in the north-eastern region of India.

The checkpost is part of several measures being taken by the governments of India and Bangladesh to increase people-to-people contact and facilitate movement of goods between the two countries.

The inauguration of the Immigration Check Post at Phulbari fulfills a long pending demand of the people of the region.