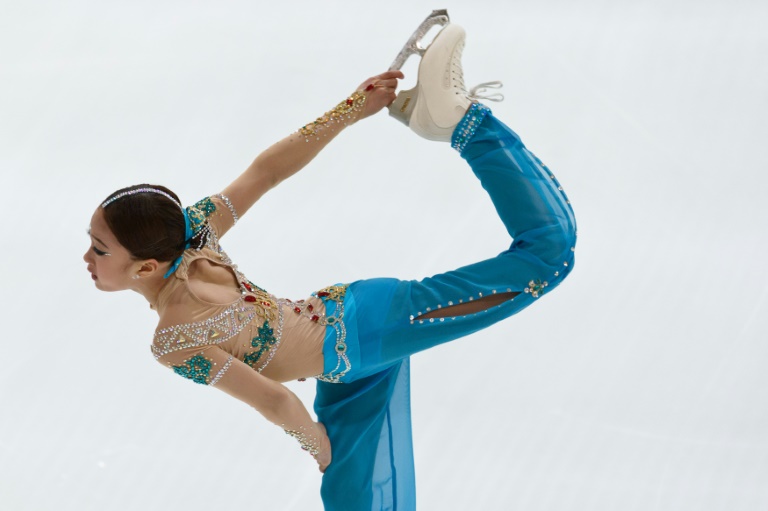 South Korea’s 11-year-old figure skating prodigy You Young has Olympic gold in her sights and with a tough, six-hours-a-day training regime, she’s prepared to work hard to get it.

Despite her tender years, You has been hailed as the heir apparent to Korean ice queen Kim Yu-Na after she became the country’s youngest ever ladies singles champion last month.

You, who is only 4ft 7ins (143 cm) tall, stunned her competitors at the national championships and was quickly dubbed a “figure skating genius” by a prominent newspaper.

It was an overnight success which has been years in the making, starting with You’s first attempts at skating aged five at a rink in tropical Singapore, where she grew up.

You has been snapped up by Kim’s agency, All That Sports, and is already eyeing the 2022 Winter Olympics, as she will be too young to compete at the 2018 edition in South Korea.

“She is even better than I was,” said Kim, who was on hand last month as You broke the retired great’s record to become South Korea’s youngest national champion.

But You’s high levels of performance come at a price — four hours a day on the ice, a further two hours training off it, and the loss of many pleasures most children take for granted.

Even Lee’s pride is piqued with uneasiness about what her daughter may be missing.

“Sometimes I worry because Young is not living a normal life as an 11-year-old. She can’t hang out with friends, wear pretty clothes to school or take piano lessons,” she said.

You is one of a group of pre-teen “Yu-Na kids” inspired by Kim, who won gold at the 2010 Winter Olympics in Vancouver but retired after the 2014 Games.

The search for a successor to Kim is intense, with South Korea just two years away from hosting the Winter Olympics in Pyeongchang.

Chung Hee-joon, professor of sports science at Dong-A University, is one critic who says You’s strenuous routine is “dangerous” for a child her age.

“There have been cases in the past where children are raised as a ‘sports machine’ and later socially discarded,” Chung told AFP.

“What’s concerning is that it’s become a common equation.”

South Korea is known for its industrious approach to sports, especially women’s golf where its meticulously drilled players dominate the world rankings.

But You remains upbeat, saying that waking up early and staying away from her favourite snacks are the hardest part about her chosen life.

The schoolgirl is now caught up in a dizzying whirl of publicity, with her profile currently so high that she is often spotted on the street by strangers.

“There are so many cameras and people recognize me on the street. But I think I need to control myself,” You told AFP.

She started skating in 2010 when, aged just five, she was captivated by Kim’s winning routine in Vancouver, watched repeatedly by her mother on the family computer.

“I was mesmerised by Kim’s performance from the 2010 Vancouver Winter Games and watched it for two straight days,” said Lee.

“Young eventually joined me and she begged me to take her skating.”

Since her first trip to the Singapore rink in March 2010, You fell in love, pleading with the employees to let her stay beyond closing time.

After a few lessons from a local instructor, You’s mother realised that skating was more than just a hobby for her daughter.

Finally, after month-long lessons in South Korea every summer and winter break, Lee decided to bring her daughter back for good for professional training in March 2013.

You will still be under the minimum age of 15 at the Pyeongchang Winter Olympics in 2018, but she is already eyeing success at the 2022 edition in Beijing.

She is now trying to master the triple axel, the highest-value triple jump which only a handful of women skaters have landed in international competition.

“I want to work harder to successfully jump the triple axel and land it at the world championships or the Olympics,” said You.

With so much hype, You admits she’s finding it hard to focus and has returned some disappointing results since winning the national title.

But she said she was determined to bounce back — by working even harder on her speed and jumps.