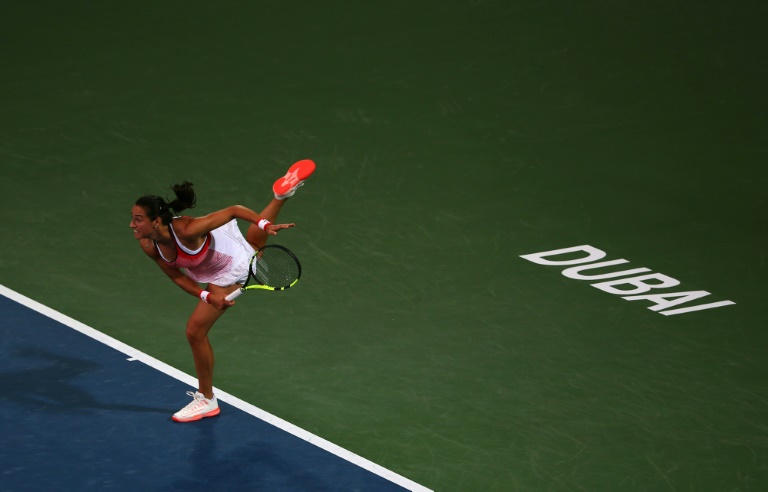 Caroline Garcia of France waited out a rain interruption of three and a half hours on Wednesday before advancing to her first quarter-final at the Dubai Tennis Championships with a 4-6, 6-4, 6-3 win over Carla Suarez Navarro.

Garcia, 22 and world ranked 38th, needed to play out the final handful of points after returning to the court in the evening following a rare rainstorm in the desert emirate which flooded the court in a city so dry there is hardly a need for municipal drainage.

In a match which finished just before the weather passed through, Czech Barbora Strycova stopped German Julia Goerges 2-6, 6-3, 6-1.

That match lasted for one and three-quarter hours, with Goerges plagued by five double-faults and suffering five breaks of serve.

The 11th-ranked Spaniard Suarez Navarro won the first set against Garcia in 44 minutes but found herself level-pegging at one set each as Garcia converted on a third set point in the second.

The weather hit with the Frenchwoman leading 5-3 in the third, sending players quickly off court.

“I was calm when we returned to the court, but as I served for it my hand was shaking,” the winner said. “But this is a part of my game we have worked a lot on.

“It is always difficult to re-start, this rain was quite unexpected. I just played aggressive and fought to the end. I stayed positive through the match.”

Australian Open quarter-finalist Suarez Navarro had played quarter-finals at the Aviation club for the last two years but could not reach a third as she faced Garcia for the first time.