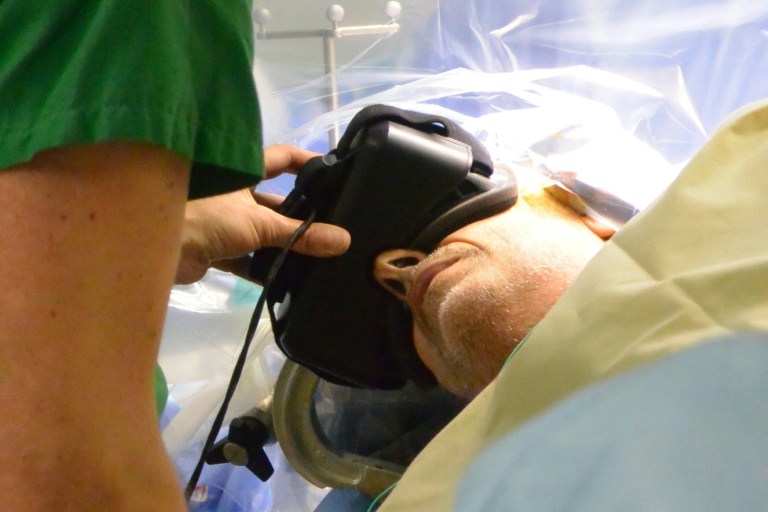 Can you imagine someone being awake during a critical brain surgery and be able to see a virtual world while doctors are cutting into the brain? That has happened.

“In creating a completely artificial world for the patient, we could map certain zones and connections of his brain related to functions that we could not, up to now, easily test on the operating table,” Philippe Menei, a neurosurgeon at Angers hospital in western France, told AFP.

The operation was performed on January 27, and the patient was recovering well, he said.

Taking a scalpel to the brain while a patient is conscious has been a common practice for more than a decade.

Doing so allows doctors to determine, during an operation, whether and how vital functions such as speech, vision and movement are affected.

Patients cannot feel the probing of their brain tissue, and do not experience pain.

“By totally controlling what the patient sees and hears, we can put him in situations that allow us to do tests on certain (neural) connections that were not possible before,” he said.

In this case, it was crucial to protect the patient’s vision because he had already lost sight in one eye due to an illness.

During the operation, the medical team created a neutral virtual environment with no single point of focus.

“In this empty void, we could control the space and make luminous objects appear in the patient’s peripheral vision,” Menei said.

Three weeks after the operation, the patient’s vision was intact despite the removal of an aggressive tumour in a region controlling sight.

Menei said the patient was now preparing to undergo chemotherapy.

Virtual reality glasses “open the way to greater precision, and allow us to envision procedures that were not possible up to now, such as the removal of otherwise inaccessible brain tumours,” he said.

His team plans to use the technique again in the coming months on patients with brain tumours situated near areas that control vision.

Virtual reality glasses could also be adapted for children, and may be tested on young patients before the end of the year.

Brain cancer is the second most common form of cancer among children in France.