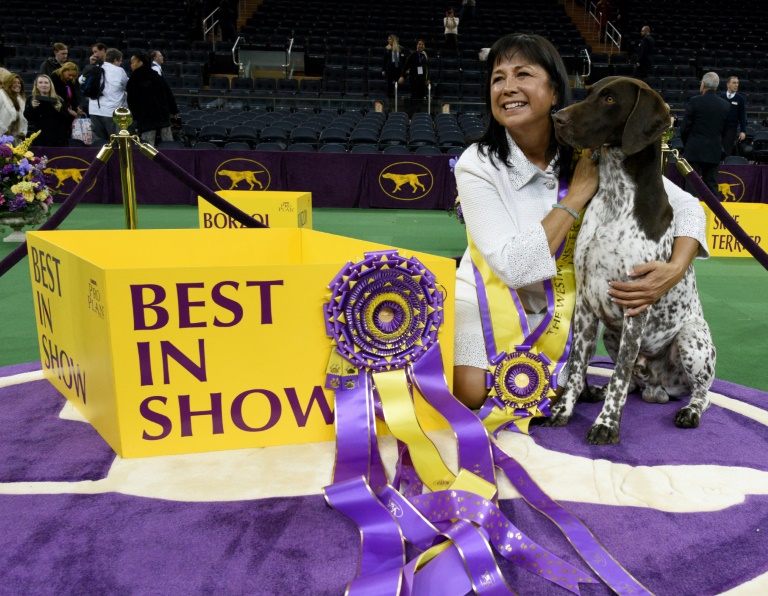 The Westminster Dog show went elegant for its 140th installment, picking a German Shorthaired Pointer as its best in show over shaggier options.

California Journey, nicknamed CJ, won out over six other finalists to nab one of the most prestigious crowns in dogdom.

Among the runners-up were fan favorites Magic, a bright-eyed German Shepherd, and the lumbering Annabelle, a Bulldog that drew especially emphatic cheers from the crowd.

The fuzziest finalist was Mr Charlie, a horizontal mass of grey and black wagging fur, while the toy entry, Panda, a Shih Tzu, drew the broadest laughs with an ill-timed shake of the hips that required a speedy coif-adjustment.

In the end, Best in Show judge Richard Meen, a Toronto psychiatrist with more than 50 years in the purebred dog world, picked the stately CJ over the motley crew of elite canines.

“Just a beautiful dog,” Meen said afterwards at a news conference with CJ and his breeder, who described the dog’s coat as “white-ticked and liver” colored.

The breed is also known for its redwood-colored visage and a colt-like physique, traits clearly in evidence as CJ sat calmly.

Meen saw in CJ the embodiment of the pointer’s core mission of hunting.

“This dog never stopped looking,” Meen said. “He floated around the ring beautifully.”

CJ is the third German Shorthaired Pointer to win Westminster and a descendant of the other two champs, including his grandmother “Carlee,” who won in 2005, said his co-breeder, co-owner and handler, Valerie Nunes-Atkinson.

The three-year-old CJ only began showing six months ago, but Nunes-Atkinson sensed immediately he was a natural.

“When he was born, he was an old soul,” she said. “Six weeks old, we knew there was something special.”

Nunes-Atkinson is a second-generation breeder and grew up with champion dogs, describing her evolution as initially trepidatious around the champions before coming to accept them as dogs.

“In the ring, he’s very serious,” she said of CJ. “At home, he’s silly. He rips around our property with his best-friend, Ramona,” a whippet.

“He gets into messes.”

Winning Westminster “is something I’ve dreamed of since I was 10 years old,” she said, adding that she was in a state of “disbelief.”