Home Politics Question Hour washed out in UP assembly 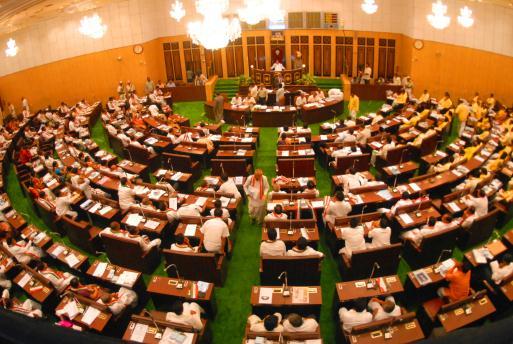 Question Hour in the Uttar Pradesh assembly was washed out with BJP members demanding the dismissal of a senior minister, who they alleged, made derogatory remarks about the trader community.

BJP members trooped into the Well of the House as soon as it assembled and started raising slogans demanding the dismissal of a minister, alleging he made “derogatory remarks” against the trader community during a discussion on the budget on Monday.

Reacting to it, Parliamentary Affairs Minister Azam Khan said, “You are asking for a complaint against a minister. But who should one approach against Prime Minister’s statements made in Bihar and Delhi”.

Speaker Mata Prasad Pandey assured the BJP members he would look into the matter and expunge the “unparliamentary words” if there were any.

However, BJP legislators kept on shouting slogans from inside the Well, leading to the adjournment of the House twice for 15 minutes each. The entire Question Hour was washed out.