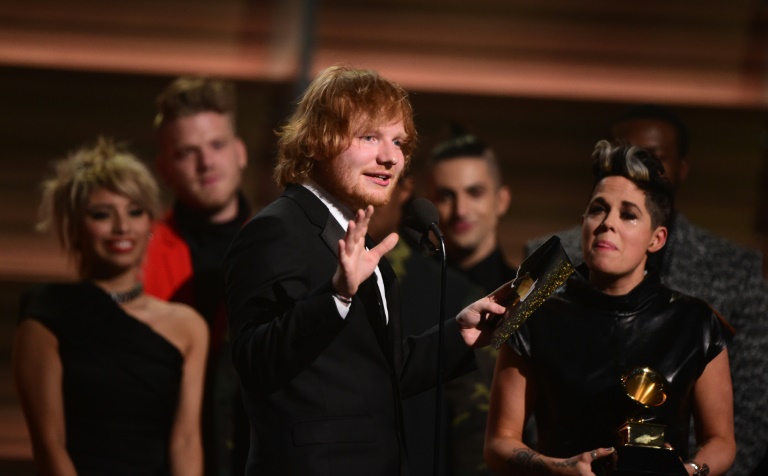 Brace up, people, the Grammy is here. As the musical race has begun, fans are eagerly waiting to see their favourite artistes bag the coveted award.

English singer-songwriter Ed Sheeran on Monday won Song of the Year for “Thinking Out Loud,” a bare guitar ballad that made history as a viral hit.

Sheeran shared the award with his co-writer Amy Wadge, a British folk artist. Song of the Year recognizes songwriting, while Record of the Year, a category in which “Thinking Out Loud” was also nominated, looks at the overall song.

Kendrick Lamar, the rapper who has emerged as a voice of the Black Lives Matter movement, took an early lead Monday at the Grammys where pop superstar Taylor Swift also had victories.

In awards presented before the main gala in Los Angeles, Lamar had won four Grammys — including Best Rap Song for “Alright,” which has become an anthem against police abuse.

Lamar leads the night’s nominations amid acclaim for his experimental rap opus “To Pimp a Butterfly,” a meditative look with jazz touches at the plight of black America.

He did not specify further, but at last year’s Black Entertainment Television awards, Lamar sang “Alright” atop a graffiti-sprayed police car.

Thundercat, a bassist and songwriter who worked with Lamar, said that “To Pimp a Butterfly” was a rare musical work that would live for posterity.

“He did one of those albums that is getting its proper treatment after people heard it,” he told reporters.

Swift, whose album “1989” was by far the best seller among those in contention, also won two early awards and was in contention in the leading categories.

She won Best Pop Vocal Album for “1989” and Best Music Video for her song “Bad Blood” — which also went to Lamar, who appeared in the action-themed clip.

Producer Jack Antonoff accepted the award on behalf of Swift, who was rehearsing for her performance, but took out his mobile telephone to put the pop singer on speakerphone.

“Oh my God,” the 26-year-old starlet said, in an exclamation she quickly shared with her more than 71 million Twitter followers.

Swift was nominated for seven Grammys for music off “1989,” the former country prodigy’s transformation into a pop superstar.

Alabama Shakes, who are in contention for the prestigious Album of the Year, hail from the small town of Athens, Alabama and played in obscurity until winning attention on a trip to New York in 2011.

“I never even dreamed of this moment, so thank you so much,” Howard told the crowd in her thick Southern drawl.

The 25-year-old singer, whose real name is Abel Tesfaye, was born in Toronto to Ethiopian immigrant parents and initially performed in literal anonymity, releasing songs under his stage name over the Internet in 2010.

He became a star in the past year due to the popularity of “Can’t Feel My Face,” a pop R&B track that has invited comparisons to Michael Jackson.

But a favorite for Record of the Year — which recognizes overall singles, whereas Song of the Year honors writers — is “Uptown Funk,” which spent a near-record 14 weeks at number one on the US charts.

With vocals by Bruno Mars set to a funky beat reminiscent of early Prince, the song marked a breakthrough as a solo artist by 40-year-old veteran British producer Mark Ronson.

The song picked up an early Grammy for Best Pop Duo/Group Performance.

The Grammys will feature a performance by the British ballad singer Adele, whose album “25” has smashed early sales records but came out too early for Grammys contention.

The event will also pay tribute to a number of artists who recently died, chief among them the rock icon David Bowie.

Lady Gaga, whose glittery outfits and sexual frankness bear a clear influence from Bowie, has teamed up with chip-maker Intel for a tribute to the Starman described by Grammy producers as the most technologically ambitious ever at the awards.

Bowie died on January 10 from a publicly undisclosed battle with cancer, two days after he turned 69 and released his final album, “Blackstar.”

While the experimental album also came out too late for this year’s Grammys, composer Maria Schneider won a Grammy for best arrangements for one of the songs, “Sue (Or in a Season of Crime).”

Schneider, who broke down in tears, said that she did not know Bowie was ill and had sent him an email about “Blackstar” that she doubt he saw.

“It was just really the greatest privilege to work with David and to experience his creativity and his wish to just go into an entirely new realm,” she said.