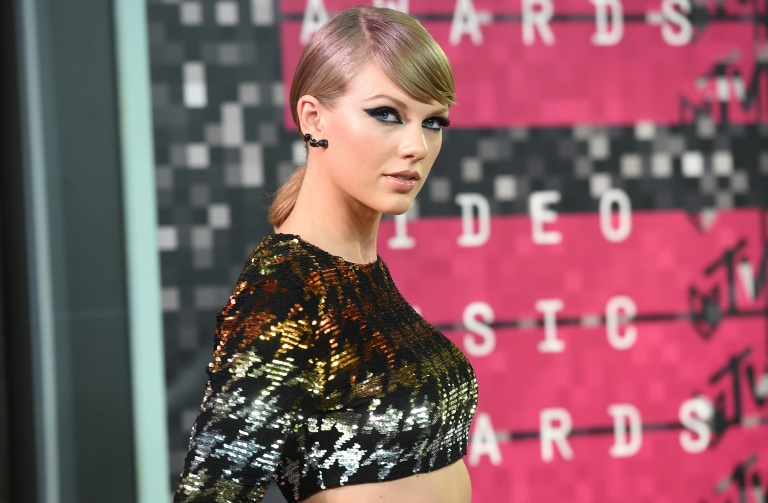 Hours before the televised extravaganza in Los Angeles, artists gathered for a smaller ceremony with less prominent categories — and Swift picked up her first Grammy of the day, for Pop Vocal Album.

Producer Jack Antonoff accepted the award on behalf of Swift, who was rehearsing her performance later in the day, but took out his mobile telephone to put the pop singer on speakerphone.

“Oh my God,” the 26-year-old starlet said, in an exclamation she quickly shared with her more than 71 million Twitter followers.

Swift was nominated for seven Grammys for “1989,” the former country prodigy’s transformation into a pop singer that was by far the top-selling album in the United States among those in contention.

Beyond a shot at the coveted Album of the Year award, she is also in the running for the prestigious Record of the Year and Song of the Year prizes for her chart-topping single “Blank Space.”

But Lamar leads the nominations amid acclaim for his experimental rap opus “To Pimp a Butterfly,” a meditative look at the plight of black America in an era of deep concern about police brutality.

He did not specify further, but at last year’s Black Entertainment Television awards, Lamar sang “Alright,” an unofficial anthem of the Black Lives Matter protest movement, atop a graffiti-sprayed police car.

Lamar is nominated for 11 Grammys, more than any artist in a single night except late King of Pop Michael Jackson.

Tied with Swift at seven nominations is Canadian R&B singer The Weeknd, who began his career in near anonymity in 2010 as he posted songs on the Internet but rose to fame last year with “Can’t Feel My Face.”

But a favorite for Record of the Year — which recognizes overall singles, whereas Song of the Year honors writers — is “Uptown Funk,” which spent a near-record 14 weeks at number one on the US charts.

With vocals by Bruno Mars set to a funky beat reminiscent of early Prince, the song marked a breakthrough as a solo artist by 40-year-old veteran British producer Mark Ronson.

In a sign of the wide appeal of “Uptown Funk,” among those rooting for it to win is glam metal pioneer Alice Cooper, who said he was astounded by the production quality.

“It’s not my kind of music, but it’s the best record of the year easily,” Cooper told AFP.

“Ronson did an amazing job on that record. He’s the next big guy,” Cooper said.

Cooper will perform at the Grammys in his group The Hollywood Vampires that features both Aerosmith’s Joe Perry and actor Johnny Depp on guitars.

Cooper — who described Depp as a “killer guitar player” despite being better known for movies — promised a loud rendition of Motorhead’s “Ace of Spades” in memory of the metal band’s late frontman Lemmy.

The Grammys will honor a number of artists who recently died, chief among them the rock icon David Bowie.

Lady Gaga, whose glittery outfits and sexual frankness bear a clear influence from Bowie, has teamed up with chip-maker Intel for a tribute to the Starman described by Grammy producers as the most technologically ambitious ever at the awards.

Bowie died on January 10 from a publicly undisclosed battle with cancer, two days after he turned 69 and released his final album, “Blackstar.”

While the experimental album came out too late for contention, tearful composer Maria Schneider won a Grammy for best arrangements for one of the songs, “Sue (Or in a Season of Crime).”

Bowie was also honored on the eve of the Grammys at an annual party thrown by veteran music executive Clive Davis, with alternative rock great Beck playing with surviving members of Nirvana.

“This is for two geniuses who are no longer with us,” Beck said as he opened “The Man Who Sold The World” — a Bowie song famously covered acoustically by Nirvana shortly before frontman Kurt Cobain’s suicide.

Beck, the last Album of the Year winner, led the song with touches of both versions as Nirvana’s Dave Grohl, now singer and guitarist of Foo Fighters, returned to drums.

Grohl and Nirvana bassist Krist Novoselic played a one-off show together at a New York bar in 2014 following Nirvana’s induction into the Rock and Roll Hall of Fame, but have spoken only vaguely of a broader reunion by the grunge icons.