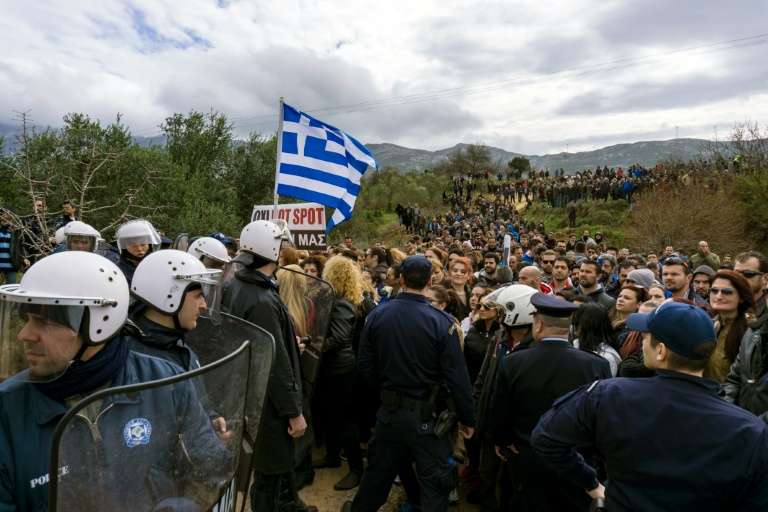 The four long-delayed “hotspot” centres will open on the islands of Lesbos, Chios, Leros and Samos, which have been struggling to cope with a relentless flow of migrants landing from Turkey.

A fifth centre on the island of Kos will be ready “in five days” despite strong opposition from the local mayor and residents over the impact on the vital tourism industry, Kammenos told reporters in Athens.

Each of the facilities will have enough prefab housing to accommodate 1,000 migrants, who will spend three days being registered, having their fingerprints taken and being sorted between those eligible for asylum in the EU and economic migrants facing eventual deportation.

One aim will be to help spot jihadists using the migrant crisis to enter Europe — a pressing concern after two of the men who carried out November’s attacks in Paris sneaked in via Greece, posing as refugees.

More than 850,000 migrants, fleeing war and poverty in the Middle East and elsewhere, transited through Greece last year on their way to northern Europe.

Athens has faced heavy pressure from fellow EU members to better control its borders, with the bloc giving Greece a three-month ultimatum last week to remedy “deficiencies” or face effective suspension from the Schengen passport-free zone.

Prime Minister Alexis Tsipras is expected to discuss the crisis with visiting EU president Donald Tusk on Tuesday, while Kammenos will visit the centres on Leros, Chios and Lesbos.

Speaking alongside Kammenos, junior interior minister for police Nikos Toskas reported a sharp drop in arrivals on the Greek islands in recent days.

“We’ve gone from 2,500 arrivals per day on the islands to around 200. Yesterday evening nearly zero arrived… It’s too early to draw conclusions, but it confirms that Turkey holds the key to the influx,” he said.

NATO is gearing up to launch an operation in the Aegean Sea against smugglers bringing migrants from Turkey, with Kammenos saying the force was “in the Aegean awaiting details of the operational plan being prepared in Brussels”.

The hotspot centres were supposed to open late last year but have faced repeated delays. Athens stresses it has already been registering migrants with the help of 400 staff from EU border agency Frontex.

“Greece has honoured its commitments — we expect that others do the same,” junior defence minister Dimitris Vitsas told reporters.

“We must see if Europe wants to keep its sense of solidarity, or become a space where everyone wants to shut themselves in their own little castles.”

Two more centres are to open on the Greek mainland, near Athens and Thessaloniki, where registered migrants will be transferred while their asylum requests are examined.

As in Kos — where riot police fired tear gas at residents protesting against the planned centre over the weekend — the hotspots on the mainland have faced strong opposition from some residents.