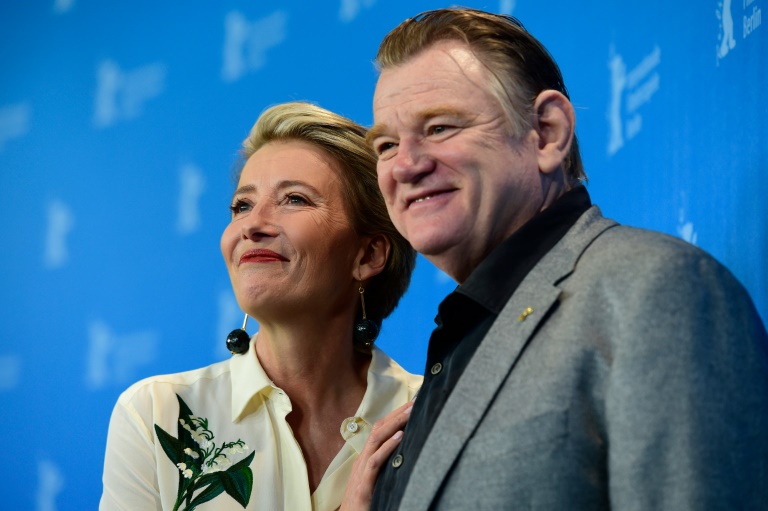 Emma Thompson and Brendan Gleeson Monday presented “Alone in Berlin” in which they play a real-life couple who resisted the Nazis — saying they hope the film will help buck a rising tide of intolerance in Europe.

The film, which got a mixed reception at a press preview ahead of a gala premiere at the Berlin film festival, is an adaptation of Hans Fallada’s 1947 book, the most widely read German anti-Nazi novel after the war.

It tells the story of Anna and Otto Quangel, a working-class Berlin couple whose only son is killed in battle.

Their grief drives them to begin drafting seditious postcards against the Nazi “war machine” which they leave in secret in stairwells and foyers in the hope it will drive popular resistance to Hitler.

The Quangels and those who discover the cards know that being caught with them would mean certain death, and as the treasonous propaganda turns up across the city, the Gestapo launches a manhunt for the campaign’s instigators.

Thompson, a two-time Oscar winner, and she found inspiration the couple’s enormous courage in standing up for human decency.

“This movie is about being brave, saying things that are not popular,” she said.

Irish actor Gleeson (“The Guard”, “In Bruges”) said the couple’s choice to maintain their honour in a brutal society set a powerful example.

“What is unusual about this film and the novel before it and the story of these two people is that there was nothing particularly remarkable about them in their lives, other than living at a time of great horror,” he said.

“Even if in practical terms they didn’t start a revolution, the idea of a personal, an ordinary, refusal to go along with the policy of hatred I think is a massive thing.”

Bruehl warned that a resurgence of the far right in Europe stemming from the refugee crisis underlined the importance of the film’s message.

“What the film is dealing with is unfortunately still very relevant and current because in all of Europe and especially in this country, there is a movement to the right,” he said.

“So I think we all have to be very alert that we are not poisoned by all those people and their rising racist and fascist attitudes.

“This disease is not extinct, and that’s why I think it is important to tell these stories and to have this film dealing with this inspiring and courageous couple back in the ’30s and ’40s who fought against the Nazi regime.”

“Alone in Berlin” was long a primarily German cultural phenomenon, taught in schools and adapted for the stage, television and the cinema.

But the 2009 publication of an English translation of the book turned it into a global bestseller, which Swiss director Vincent Perez said had been decisive in getting the financing to make the movie.

The 90-minute film, however, strips out much of the local colour and minor characters that made the novel such an indelible portrait of life under the Third Reich.

It met with a smattering of boos and polite applause at a packed screening, with many reporters questioning the decision to film a German story in often stilted English.

“As a European, I really wanted to bring this film up to an international level,” Perez said of the German-French-British co-production shot in Germany.

“I think the subject itself is so powerful that making it in English was the best decision, the best choice because we don’t tell a story only for the Germans, we tell a story for the French, for the US.”

“Alone in Berlin” is one of 18 films vying for the festival’s Golden Bear top prize, to be awarded by a jury led by Meryl Streep on Saturday.