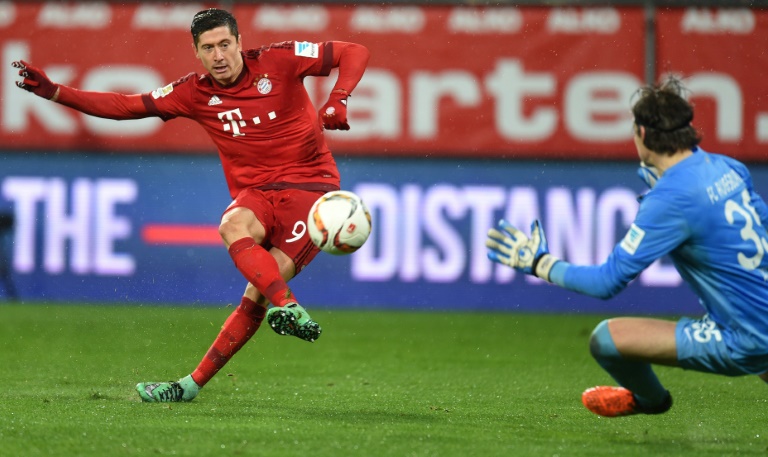 Poland striker Lewandowski netted either side of half-time with Thomas Mueller securing the points for the Bundesliga leaders before Raul Bobadilla pulled a goal back for Augsburg late on.

Lewandowski now has 21 goals to his name this season, one more than Borussia Dortmund striker Aubameyang on 20. He has now scored eight of Bayern’s last nine goals and has netted 31 times in all competitions.

Playing in front of Thiago Alcantara and Mueller, he showed clinical finishing on 15 minutes to open the scoring and calmly curled in his second on 62 minutes by converting Thiago’s pass.

Mueller added the third on 78 minutes for his 15th league goal of the season, leaving him and Lewandowski with 36 goals between them in Germany’s top flight this season.

Despite Bobadilla’s late consolation, Bayern are eight points clear of Dortmund at the top of the table.

The win was a big boost for Bayern coach Pep Guardiola after he lost yet another defender on the eve of the Bavarian derby when Holger Badstuber fractured his ankle in training.

With Jerome Boateng, Medhi Benatia and Javi Martinez sidelined, it left Guardiola without a single fit centre-back as Badstuber underwent surgery on Saturday.

He misses the rest of the season after suffering his fourth major injury since 2012 including twice tearing his cruciate knee ligament.

“We have had a lot of injuries this season, but we all love Holger and it is incredible what has happened to him,” said Guardiola.

The Spaniard, like the rest of the squad before the game, wore a t-shirt with a direct message to Badstuber: “We’re with you – you’ll manage it again (to come back)”.

“We’ll support him on his way back to fitness,” said Guardiola solemnly.

He fielded a back four of Juan Bernat, David Alaba, Philipp Lahm and Joshua Kimmich — all of whom are under five foot 11 inches (1.80m).

Earlier, Hamburg pulled clear of the relegation battle with a shock 3-2 comeback win at home to Borussia Moenchengladbach to end their six-game winless streak.

US international Fabian Johnson gave the visitors an early lead before Gladbach defender Martin Hinteregger stabbed the ball into his own net from a corner on 38 minutes to equalise for Hamburg.

And just three minutes later, Artjoms Rudnevs finished a Hamburg counter-attack to make it 2-1 at the break.

Midfielder Ivo Ilicevic extended Hamburg’s lead when he headed home from a corner with 10 minutes to go.

Aubameyang, who had a leg knock, missed his first league match of the season for Dortmund.

Wolfsburg warmed up for Wednesday’s Champions League last 16, first leg at Gent with a 2-0 win at home to Ingolstadt, their first victory since knocking Manchester United out of the Champions League in December.

Bayer Leverkusen moved up to third with a 2-1 comeback win at Darmstadt.

On a heavy pitch, Sandro Wagner stabbed home to give Darmstadt an early lead, but Leverkusen drew level when Darmstadt defender Aytac Sulu headed into his own net on 62 minutes.

Julian Brandt started the move he finished by tapping in Leverkusen’s winner on 77 minutes.

The youngest manager in Bundesliga history made his debut when Julian Nagelsmann, 28, was on Hoffenheim’s bench for their 1-1 draw at Werder Bremen in a basement battle.

Nagelsmann took over after predecessor Huub Stevens resigned on Wednesday due to heart problems. The result leaves both teams in the bottom three.

Eintracht Frankfurt remain just above the relegation places after their 3-1 defeat at Cologne.