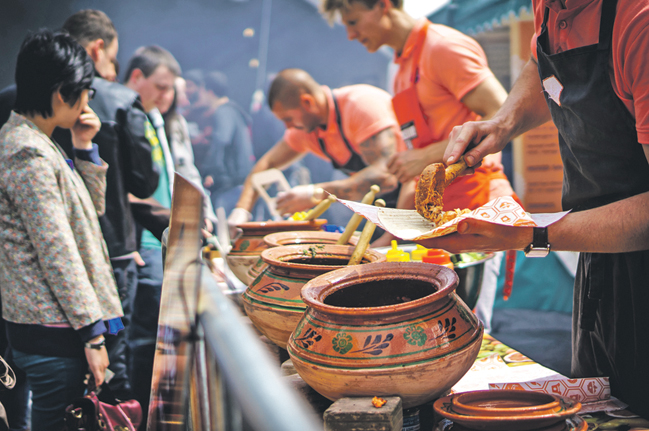 If you are a foodie and you love the cuisines from England, get ready to allow your taste buds to tickle very soon.

The ‘Taste of Britain Curry Festival’ is all set to travel to the home of curries, India, with leading British chefs aiming to recreate an exclusive selection of dishes that have become a hit in the European country.

The four-member team will be headed by Azadur Rahman, one of the most experienced and celebrated curry chefs in the UK.

Chef Azadur and his team will produce a range of new dishes giving a spicy twist to traditional British meals as well as classic high street favourites like Chicken Tikka Masala, Balti and Vindaloo.

A highly acclaimed chef Dominic Chapman will join Azadur and his team during the 10-day long curry festival that will take place from March 18-27 at ITC Maurya, New Delhi.

Dominic, who has cooked at two previous festivals and recently appeared in the BBC series the Great British Menu, has started his career under the tutelage of Heston Blumenthal, the world famous three-starred Michelin chef who owns the world famous Fat Duck restaurant.

Chef Dominic will be showcasing traditional English cuisine in the hotel’s West View restaurant, while his colleagues will offer contemporary British Indian food in the Pavilion restaurant.

“This festival illustrates the unique nature of the UK-India relationship and highlights the rich and diverse cultural make up of modern Britain.

“This festival, which I have attended in the past, is a wonderful way of showcasing the best of British chefs and their creations,” said Keith Vaz, Britain’s longest-serving Indian-origin MP.

“British food is enjoying a renaissance period after many years and curry has played a major role in helping put us back in the world kitchen.

“This festival will create the opportunity not only to showcase the best of British but also help our chefs to bring fresh ideas to their own menus by working alongside the culinary masters of ITC Maurya,” said Editor of Curry Life Magazine and Director of the Festival Syed Belal Ahmed.

“What greater inspiration could they have than a city which has been famed for its gastronomy for centuries?”

“We are delighted to be hosting the Taste of Britain Curry Festival at the ITC Maurya, the flagship property of ITC hotels in India,” said Zubin Songadwalah, General Manager.