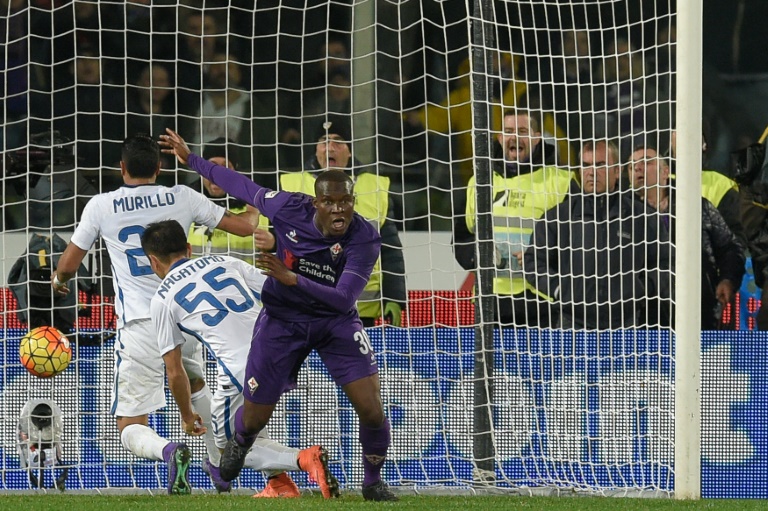 Fiorentina striker Khouma Babacar bundled home a late winner in a dramatic finish to seal a 2-1 win over Inter Milan that reignited La Viola’s hopes of European football next season.

And the Senegal striker seized the day when Samir Handanovic failed to hold Federico Bernardeschi’s weighted cross-shot into the six-yard box, bundling home at the second attempt in the first minute of added-on time.

The win moved Fiorentina two places up to third place, eight points behind new leaders Juventus, who pushed Napoli down to second at a point adrift with a 1-0 win in Turin on Saturday.

“Overall, I think we deserved the win,” Fiorentina coach Paulo Sousa told Mediaset. “We played open, attacking football and tried to exploit them down deep on both flanks.”

Referring to Babacar’s late winner, he added: “We capitalise on the fact some of the goalkeepers from these big teams help you with their rebound saves.”

Inter remain fifth but are now 12 points off the pace, four behind Fiorentina and only two ahead of city rivals AC Milan, who secured a precious 2-1 home win over Genoa earlier on Sunday.

Fiorentina’s win, however, ended on a sour note with players from both sides given their marching orders at the death, leaving the hosts to finish with 10 men and Inter nine. Inter later protested by imposing media silence.

Inter’s Alex Telles saw red for a second bookable offence eight minutes from the finish although replays suggested he got the ball in his challenge on Bernardeschi.

In the dying seconds tensions flared, with Mauro Zarate shown a red card for grabbing Inter defender Jeison Murillo by the back of the neck as they exchanged some choice words.

At the final whistle, Inter midfielder Geoffrey Kondogbia was also given his marching orders after sarcastically applauding the referee.

Sousa further applauded his players, as they bid for an unlikely top three finish and a possible Champions League qualifying place.

“These lads believe in themselves, even when things aren’t going well,” added the Portuguese, a midfielder with Inter in his playing days.

“They have a good work ethic and want to succeed, and that makes me proud to coach them.”

Japan midfielder Keisuke Honda hit a late winner in an inspirational performance for Milan as they continued their resurgence with a 2-1 win over Genoa.

Milan are bidding to secure a Champions League spot for the first time in three seasons and welcomed Genoa to the San Siro on the back of a run of six games without defeat.

“In this second half of the season we’re doing well, and can do better. We have to keep it going,” said Milan coach Sinisa Mihajlovic

“I’m happy for Honda because in the past he has, like (Riccardo) Montolivo, fallen out of favour. But both have shown that with will and sacrifice you can transform the jeers into cheers.”

Honda stung Mattia Perin’s gloves with a rasping shot that the ‘keeper palmed out of the top corner on four minutes.

From the resulting corner the ball was kept in play and it was Honda’s cross, flicked on by M’Baye Niang, that found Carlos Bacca unmarked at the back post to slam the ball past Mattia Perin after just five minutes.

It was Bacca’s 13th league goal of the campaign and took the Colombian joint second in the league scoring charts alongside Juve forward Paulo Dybala, who is 11 strikes behind runaway leader Gonzalo Higuain of Napoli.

Honda doubled Milan’s lead just after the hour with a superb strike from 20 yards, his first goal of the season ending a 483-day goal famine.

Genoa striker Alessio Cerci, who moved to the club from Milan in the January transfer window, prompted even more jeers from the largely partisan crowd when he hit a late consolation for the visitors.