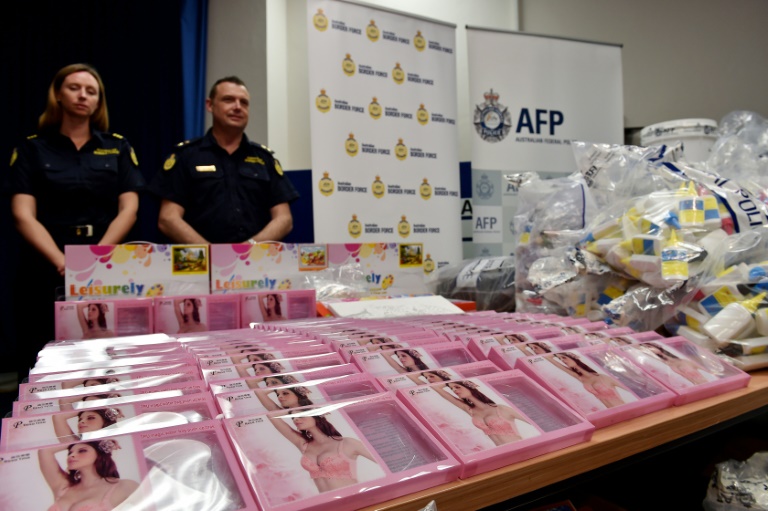 Australian police discovered millions of dollars worth of methamphetamine hidden inside a shipment of bras, part of what they said Monday was the country’s biggest ever drugs bust.

Officers found more than Aus$1 billion (US$712 million) of the lethally-addictive drug — also known as ice — in a series of raids.

More than a quarter of the stash was hidden in gel inserts used as padding for women’s underwear.

The seizure was referred to the Australian Federal Police who began an investigation that found a further 530 litres of the drug in storage units being used for art supplies.

Three Hong Kongers and a Chinese national were arrested during the joint operation with China, which Justice Minister Michael Keenan described as the largest seizure of liquid methamphetamine in Australian history.

“This has resulted in 3.6 million individual hits of ice being taken off our streets with a… value of Aus$1.26 billion,” he said.

“This largest seizure of liquid methamphetamine to date is the result of organised criminals, targeting the lucrative Australian ice market from offshore.”

In January, a 33-year-old Hong Kong man was arrested and charged in connection with the original seizure.

A further two Hong Kongers, a man, 37, and a 52-year-old woman, along with a Chinese man, 59, were also seized and charged with knowingly taking part in the manufacture of a commercial quantity of a prohibited drug.

“We are alleging that the people we have arrested weren’t just mere bit-players, they were significant players within this criminal network,” said Sheehan, adding that they all face life in prison if convicted.

The bust was part of a rare joint operation between the Australian Federal Police and the Chinese National Narcotics Control Commission — the first combined effort targeting the booming ice market.

The two sides are co-operating to gather intelligence relating to concealment methods, trafficking routes and syndicates that move meth from southeast China into Australia.

The raid comes months after Prime Minister Malcolm Turnbull unveiled a Aus$300 million strategy to combat the growing use of ice, in the wake of a government report that revealed Australia had proportionally more users than most countries.

The report showed that the use of the drug had doubled since 2007 to more than 200,000 people in 2013, with anecdotal evidence of higher current numbers.

An Australian Crime Commission report published last year found that while US$80 bought one gram of ice in China, users in Australia had to pay US$500 for the same amount.