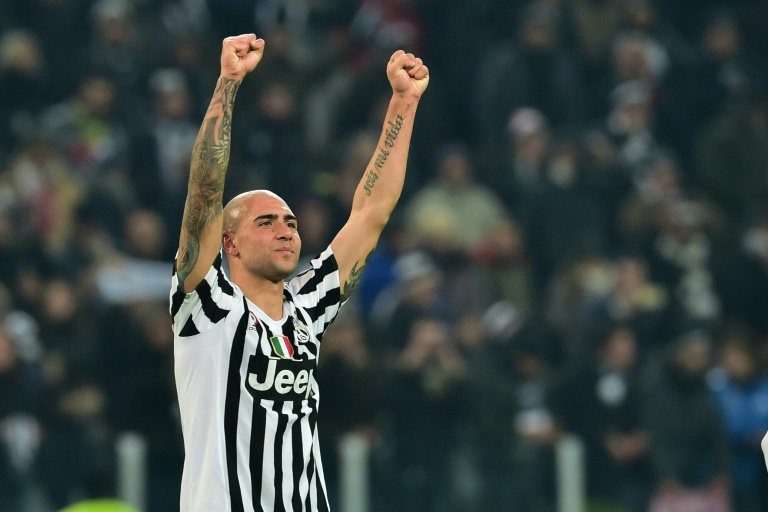 Italy Euro 2016 hopeful Simone Zaza produced a dramatic late strike as champions Juventus went one point clear at the top of Serie A with a 1-0 win over Napoli on Saturday.

Napoli, suffering only their third defeat of the campaign, travelled to Turin looking for a league double over the champions for the first time since the 2009-2010 campaign.

But just as the match looked to be heading for a draw, Zaza finished off a great Juve counter in the 88th minute with a powerful shot from 22 yards that took a slight deflection before beating Pepe Reina in the Napoli net.

Juve are now top of the table with Napoli, who are seeking their first title since 1990 when Diego Maradona steered the southern club to just their second title, now second and a point adrift.

The win also stretched Juve’s club record for consecutive league wins to 15, although fans will be hoping for vast improvements against Bayern Munich in just over a week’s time.

The chances for both sides were few and far between in a nervous opening half in which not conceding a goal seemed to be the order of the day.

Juan Cuadrado and Paul Pogba, with a 25-yard freekick, had come closest for Juve in an opening half in which Napoli really only came to life on the cusp of the interval.

First, Gianluigi Buffon produced a fine reflex save from Raul Albiol’s close-range volley from a corner.

Higuain then held the ball up well to find Lorenzo Insigne with a blind pass, only for the Italian to over-hit his return as the Argentinian rushed to the back post.

Napoli resumed where they had left off and Juve looked asleep as the diminutive Insigne somehow muscled his way across the left byline to force a block from Buffon in the opening minute after the restart.

Juve won a corner and a well-worked move saw Claudio Marchisio send a high ball over the defence to Sami Khedira, but Patrice Evra blasted the cutback over from six yards.

Zaza’s impact was almost immediate, the Italian battling for possession deep on the right to set up Dybala on the edge of the area before the Argentinian was closed down.

Minutes later Pogba, from deep on the left, set up Dybala at the same spot but the striker flashed his first-time effort just over.

Finally, the Juve crowd were up on their feet but it took the hosts another quarter-hour — in between seeing Napoli midfielder Marek Hamsik fire a 25-yard strike just wide — to produce their next chance.

Pogba held off several players on a pacey run up the middle, but despite Cuadrado screaming for service, the Frenchman hit a shot that bobbled towards a thankful Reina.

Allegri appeared to have signalled that he was happy with a share of the spoils when he replaced Dybala with Brazilian defender Alex Sandro in the dying minutes.

But after an exchange of passes, Zaza took two strides ahead of his marker to unleash the shot from outside the area that left Reina powerless, and sent Juventus Stadium into raptures.