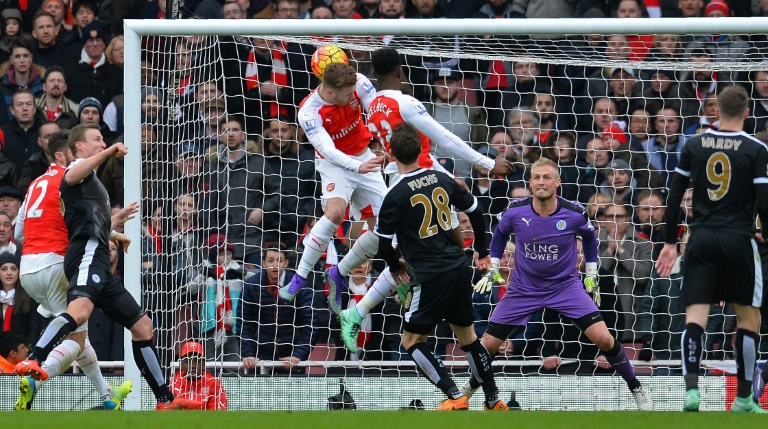 England strikers Danny Welbeck and Daniel Sturridge each made successful returns from injury to inspire their teams to big Premier League victories — in both senses of the word — on Sunday.

Welbeck headed in a 95th-minute winner to give Arsenal a 2-1 win over Leicester City that lifted them to within two points of Claudio Ranieri’s league leaders, while Sturridge led Liverpool in a 6-0 rout of Aston Villa.

Welbeck, 25, had only come on in the 83rd minute and was making his first appearance since April 2015 following a 10-month lay-off with a knee injury.

“Everyone is extremely happy for him because he’s been out for 10 months,” Arsenal manager Arsene Wenger told his post-match press conference at the Emirates Stadium. “That’s an eternity for a player.”

Victory also served to lifted Arsenal above Tottenham Hotspur and Manchester City, who face off at the Etihad Stadium later on Sunday.

“It was a pivotal moment today because the mathematics meant it could be eight points or it could be two points,” Wenger added. “That is a great change.”

Leicester took the lead on the stroke of half-time when Jamie Vardy drilled home his 19th goal of the campaign from the penalty spot after he had been felled by Nacho Monreal.

Leicester manager Ranieri felt that referee Martin Atkinson had been overzealous in dismissing Simpson after the right-back tripped Alexis Sanchez and then dragged back Olivier Giroud.

“They were normal fouls, but not yellow cards,” said the Italian.

“I think the referee was too severe to us for the sending-off. Eleven v 11, I’m sure we win the match.”

City, stunned 3-1 by Leicester last weekend, went into the game six points off the pace, with Tottenham a point better off.

Sturridge marked his first league start since early October with the opening goal as Liverpool romped to a six-goal rout of hapless bottom club Aston Villa.

Dogged by a succession of niggling injuries, the 26-year-old England striker had not started a league game since the 1-1 draw at Everton on October 4 — the last game before Brendan Rodgers was sacked as manager and replaced by Jurgen Klopp.

He headed in Philippe Coutinho’s inviting cross in the 16th minute and further goals from James Milner, Emre Can, Divock Origi, Nathaniel Clyne and Kolo Toure swept Liverpool to the biggest win of Klopp’s tenure.

“It makes a difference having both Philippe Coutinho and Daniel Sturridge on the pitch,” Klopp told Sky Sports.

“You can only play them when they are fit and available. We want the highest quality on the pitch as much as possible. You saw that today.”

“I feel humiliated,” said crestfallen Villa manager Remi Garde. “I am sorry for the fans who came to Villa Park.”