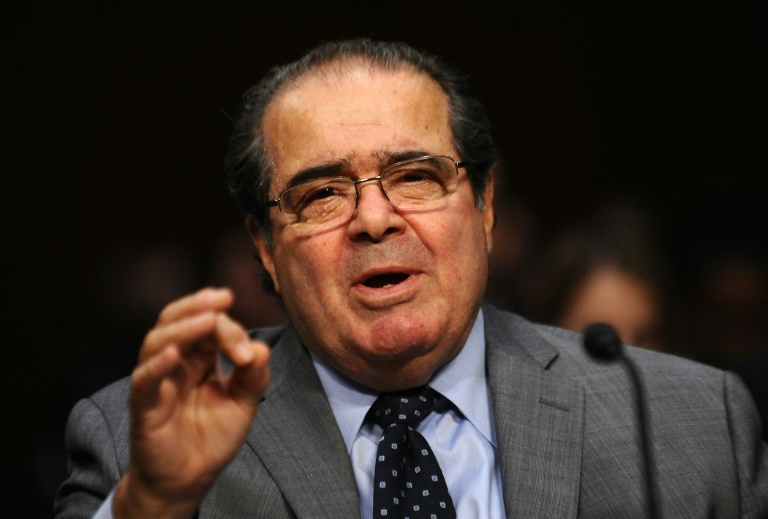 Justice Antonin Scalia, a towering conservative voice on the US Supreme Court, has died at the age of 79, setting up a showdown over his succession in the run-up to the US election.

His death after three decades on the Supreme Court bench, coming 11 months before a new American president takes office, could potentially tip the balance of the highest court in the land from its current 5-4 conservative majority to a liberal one.

The flag outside the Supreme Court was lowered to half-staff in tribute to its longest-serving justice, who died in his sleep while on a hunting trip in Texas according to media reports.

“He was an extraordinary individual and jurist, admired and treasured by his colleagues,” Chief Justice John Roberts said in a statement. “His passing is a great loss to the court and to the country he so loyally served.”

President Barack Obama was informed of Scalia’s passing and extended his condolences to his family, the White House said.

The Supreme Court’s conservative majority had recently stalled key efforts by Obama’s administration on climate change and immigration, and the future of the court is set to become a focus of the 2016 presidential campaign.

With Scalia’s death, all three branches of the US government are now in play come the November general election in which voters will pick a new president as well as new seats in the Senate and the House of Representatives.

Supreme Court justices are nominated by the president and must be confirmed by a majority vote in the US Senate before they can be sworn into office.

The process will be acrimonious at best, with Obama’s Democratic administration facing a Republican-held Congress.

The Senate Republican majority leader reacted swiftly by saying the vacancy left by Scalia’s death should not be filled before the end of Obama’s mandate.

“The American peopleâ€Ž should have a voice in the selection of their next Supreme Court Justice,” Mitch McConnell said in a statement. “Therefore, this vacancy should not be filled until we have a new president.”

But McConnell’s Democratic counterpart Harry Reid pressed for Obama to send a nominee to the Senate “right away.”

“It would be unprecedented in recent history for the Supreme Court to go a year with a vacant seat. Failing to fill this vacancy would be a shameful abdication of one of the Senate’s most essential Constitutional responsibilities,” Reid said.

Scalia was first appointed to the Supreme Court in 1986 by President Ronald Reagan, making him the first Italian-American to serve there.

The often belligerent justice was known for his brash demeanor and sharp tongue.

“War is war and it has never been the case that when you capture a combatant, you have to give them a jury trial in your civil courts,” he once told an audience, referring to prisoners at the US military prison at Guantanamo Bay.

“He brought intellect, good judgment and wit to the bench, and he will be missed by his colleagues and our country,” Bush added.

Texas Governor Greg Abbott hailed Scalia as “a man of God, a patriot and an unwavering defender of the written Constitution and the rule of law.”

“He was the solid rock who turned away so many attempts to depart from and distort the Constitution,” Abbott added.

The Republican majority in Congress has the power to block any nomination to replace Scalia during the final months of Obama’s tenure.

That would mean the court is short-handed for a year or more, with the next head of state not due to be sworn until next January.

Republican presidential candidate Ted Cruz joined in pressing for such an outcome.

“Justice Scalia was an American hero. We owe it to him, & the Nation, for the Senate to ensure that the next president names his replacement,” he tweeted.

Republican presidential frontrunner Donald Trump hailed Scalia as “one of the best of all time.”

“His career was defined by his reverence for the Constitution and his legacy of protecting Americans’ most cherished freedoms,” Trump added.

“He was a justice who did not believe in legislating from the bench and he is a person whom I held in the highest regard and will always greatly respect his intelligence and conviction to uphold the Constitution of our country.”