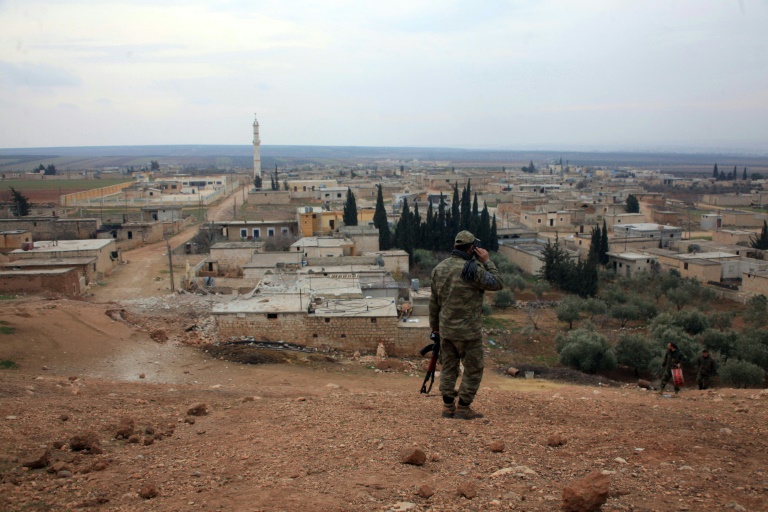 There were no further details on the nature of the Turkish strikes but they probably involved artillery fire from tanks.

Ankara considers the PYD and its YPG militia to be branches of the Kurdistan Workers Party (PKK) which has waged a decades-long insurgency against the Turkish state.

Saturday’s shelling, which Anatolia said was in response to incoming fire, came shortly after Turkish Prime Minister Ahmet Davutoglu said Ankara would, if necessary, take military action against the PYD.

“We can if necessary take the same measures in Syria as we took in Iraq and Qandil,” he said in a televised speech.

The premier was referring to Turkey’s bombing campaign last year against PKK targets in their Qandil mountain stronghold in northern Iraq.

Also in the Aleppo region, which has taken centre-stage in the conflict, US-backed Syrian Democratic Forces, an alliance of Kurdish and Arab fighters, launched a two-pronged attack on Tal Rifaat, one of the remaining rebel bastions north of Aleppo city, the Observatory said.

It said Tal Rifaat also came under attack in at least 20 Russian air strikes on Saturday.

The US State Department said it was concerned about the situation north of Aleppo, was working to “de-escalate tensions on all sides” and urged Turkey to halt its strikes.

“Wâ€Že have urged Syrian Kurdish and other forces affiliated with the YPG not to take advantage of a confused situation by seizing new territory,” spokesman John Kirby said in a statement.

â€Ž”We have also seen reports of artillery fire from the Turkish side of the border and urged Turkey to cease such fires.â€Ž”

With the conflict directly drawing in more international players, Turkey’s Foreign Minister Mevlut Cavusoglu, quoted in Turkish newspapers, said Riyadh and Ankara were coordinating plans to intervene in Syria, where Russia has been backing a successful regime offensive against rebels.

“If there is a strategy (against the Islamic State jihadist group), then Turkey and Saudi Arabia could enter into a ground operation,” he said.

Cavusoglu said Saudi Arabia is also sending planes to the Turkish base of Incirlik, a key hub for US-led coalition operations against IS already used by Britain, France and the United States for cross-border air raids.

Turkish media later quoted military sources as saying between eight and 10 Saudi jets would be deployed in Incirlik within the coming weeks, with four F-16 fighters to arrive in a first wave.

Asked if Saudi Arabia could send troops to the Turkish border to enter Syria, Cavusoglu said: “This is something that could be desired but there is no plan. Saudi Arabia is sending planes and they said ‘If the necessary time comes for a ground operation then we could send soldiers’.”

Saudi Foreign Minister Adel al-Jubeir, meanwhile, said in a German newspaper interview: “There is discussion on whether ground troops are needed against IS.

“If a decision is taken to send in special units against IS, Saudi Arabia is ready to take part.”

In an interview with AFP released Friday, Syrian President Bashar al-Assad said he “doesn’t rule out” that Turkey and Saudi Arabia would intervene militarily in Syria, but said his armed forces “will certainly confront it”.

Saudi Arabia had already said this month it was ready to join any ground operation against IS.

Ties had been damaged by Saudi’s role in the 2013 ouster of Egyptian president Mohamed Morsi, a close ally of Ankara.

Saudi Arabia and Turkey both staunchly support rebels seeking to oust Assad, and see his overthrow as essential for ending Syria’s five-year civil war that has cost more than 260,000 lives.

They fear the West is losing its appetite to overthrow him on the assumption he is “the lesser of two evils” compared to the IS jihadists.

Both are outraged by Russia’s military intervention in Syria, which analysts believe has given Assad a new lease of life and has also deeply alarmed the West.

Russian Prime Minister Dmitry Medvedev said Saturday strains with the West over the Syrian and Ukraine conflicts had plunged the world into a “new Cold War”.

US Secretary of State John Kerry complained that the vast majority of Russia’s attacks in Syria were against “legitimate opposition groups” rather than IS jihadists.

An ambush by rebels on pro-regime forces near Damascus this week killed 76 fighters, the Syrian Observatory said on Saturday.

World powers on Friday announced an ambitious plan to stop fighting in Syria within a week.

But doubts have emerged over its viability, especially because it did not include IS or Al-Qaeda’s local branch, which is fighting alongside other rebel groups in several areas.

On the humanitarian front, a convoy carrying medical aid Saturday entered the besieged, rebel-held Douma area, a flashpoint near Damascus.