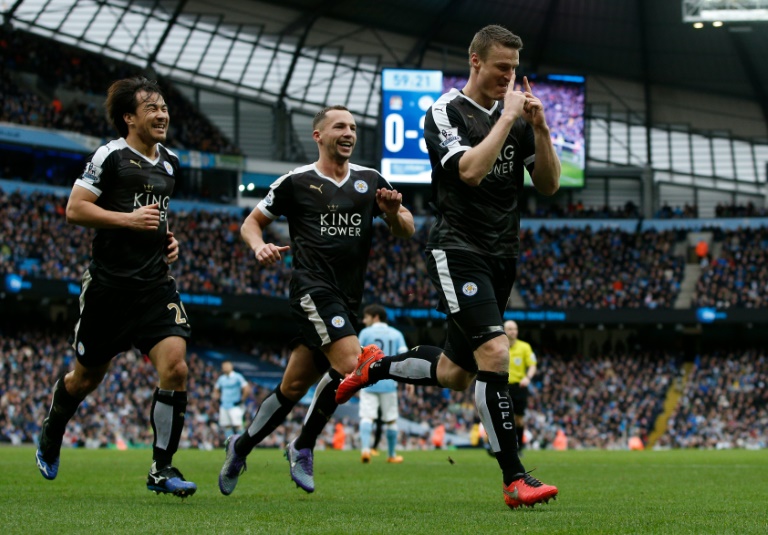 The top four sides in the Premier League feature on a double-header super Sunday with unlikely leaders Leicester travelling to third-placed Arsenal and Tottenham, in second, heading to fourth-placed Manchester City.

Leicester have a five-point lead over Tottenham, who in turn sit ahead of Arsenal only on goal difference. City, meanwhile, are a further point back.

As a sign of the top four’s title credentials, there is a six-point gap between City and Manchester United who have played a game more.

Leicester’s colourful manager Claudio Ranieri has scoffed at suggestions that the leaders are under increased pressure ahead of their trip to Arsenal.

“The pressure is for the other teams, not us,” said Ranieri.

“The money and the big gap? We have pressure for our little gap, Arsenal have more pressure because they have spent more money.”

With City and second-placed Tottenham Hotspur guaranteed to take points from each other on Sunday, Ranieri’s side have an extra incentive to claim a first win at Arsenal since September 1973.

Arsenal won the first meeting between the two teams 5-2 in September with Alexis Sanchez grabbing a hat-trick.

Danny Welbeck is close to a return following a knee problem while faced with the threat of Jamie Vardy’s searing pace, manager Arsene Wenger may persevere with the centre-back pairing of Laurent Koscielny and Gabriel, rather than recall the ponderous Per Mertesacker.

Leicester will be near full strength, although Jeff Schlupp remains sidelined by a hamstring injury and Daniel Amartey is not ready to feature following his January move from FC Copenhagen.

The Foxes were bottom of the table when they last visited Arsenal a year ago.

Manchester City captain Vincent Kompany is set to end his latest injury absence and return to lead his side’s bid to revive their title challenge against Tottenham.

Kompany has been out of action since a 4-1 win over Sunderland on Boxing Day when he suffered the recurrence of a calf injury that has dogged the defender in recent seasons.

The Belgium international, 29, has been restricted to just nine league appearances this season, but with him in the starting line-up City have not lost and have conceded just two goals.

City manager Manuel Pellegrini will therefore restore Kompany to the centre of defence as his side aim to bounce back from the 3-1 defeat to Leicester.

In addition, Fabian Delph has sustained an Achilles tendon injury which will sideline the midfielder for up to seven weeks and probably keep him out of England’s high-profile friendlies against Germany and the Netherlands at the end of March.

But Spain midfielder David Silva is fit for the Eastlands showdown with Tottenham — who ended a run of four successive defeats against City with a 4-1 win in September — after recovering from an ankle injury.

Tottenham travel to Manchester in outstanding form, having won their last six matches and are eyeing a first title since 1961.

Liverpool manager Jurgen Klopp is backing misfiring striker Christian Benteke to rediscover his goal-scoring touch in time for his return to Aston Villa.

Benteke is badly out of form as he prepares for his first appearance at Villa Park since leaving for Liverpool in a Â£32.5 million (41.9m euros; $47m) transfer last July.

The Belgium striker missed a series of inviting chances against West Ham United in the Reds’ midweek FA Cup fourth-round replay defeat and his dismal run without a goal has now extended to 11 matches.