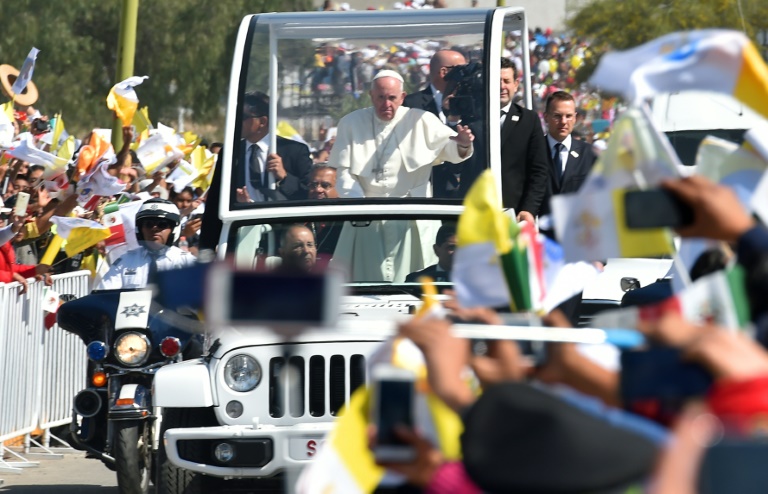 Pope Francis waded into one of Mexico’s most dangerous cities on Sunday to celebrate an open-air mass with more than 300,000 Catholic faithful longing for a message of peace.

Throngs lined the concrete-laden streets of Ecatepec, whose walls were decorated with graffiti art featuring the pope’s image, to cheer the pontiff on the second full day of a trip that will take him to other Mexican hotspots.

The rough Mexico City suburb of 1.6 million people has become infamous for a spate of disappearances of women, whose bodies have turned up in abandoned lots or canals.

The city lies in the populous state of Mexico, where some 600 women have been killed between January 2014 and September 2015, according to the non-governmental National Citizen Observatory of Femicides.

The 79-year-old Argentine pontiff arrived from Mexico City by helicopter after flying over the majestic Moon and Sun pyramids of the pre-Columbian city of Teotihuacan.

Thousands of pilgrims spent the night outdoors, wrapping themselves in blankets and using cardboard as makeshift tents against freezing temperatures on the field where the mass will be held.

Many said that despite the city’s bad reputation, they were not concerned about sleeping outside. Hundreds of police officers stood guard around the field.

“We know that Ecatepec has a lot of problems like the lack of security and kidnappings,” said Rodrigo Perez, a 25-year-old public security student.

But the pope’s visit, he said, is a chance to “talk about peace and unity.”

The Argentine-born pontiff made it clear before his arrival in Mexico that he would speak out about the corruption and crime afflicting parts of the country.

He used his visit to the National Palace and the capital’s cathedral on Saturday to bluntly tell political and religious leaders to provide Mexicans with “true justice” and combat drug violence with “prophetic courage.”

Many Mexicans, fed up with a decade of drug violence that has left 100,000 dead or missing, had hoped to hear such words from the 79-year-old pontiff.

Pope Francis has chosen to visit some of Mexico’s most troubled regions during his five-day trip to the world’s second most populous Catholic country.

The crimes against women in the state of Mexico, which surrounds the capital, prompted the federal government to declare a “gender violence alert” requiring protective measures in 11 towns, including Ecatepec.

“People who kill or who are wicked should think about the fact that we are women and that we should be respected,” said Mariana Virginia Hernandez, 45, who came from the neighboring state of Hidalgo for the mass and wore several sweaters and a poncho due to the cold.

Ana Yeli Perez, legal adviser at the National Citizen Observatory of Femicides, said the organization is “concerned about the lack of visibility of the issue because the government controls it. We hope the pope speaks about it.”

But Karla Paola Romero, a 21-year-old activist who was nearly kidnapped three years ago, said gender violence would not be resolved “with a miracle.”

Romero, who will not be at the mass, spoke near a hill where a woman’s body was found in December. The victim had been raped and hanged.

The pope will face other tough issues during his trip.

On Monday, Pope Francis will travel to Mexico’s poorest and least Catholic region, the southern indigenous state of Chiapas.

On Tuesday, he will visit the capital of Michoacan, a western state where farms formed vigilante forces to counter a drug cartel in 2013.

The pope caps his trip in Mexico’s former murder capital, Ciudad Juarez, for a mass that will straddle the US-Mexico border to highlight the plight of migrants.