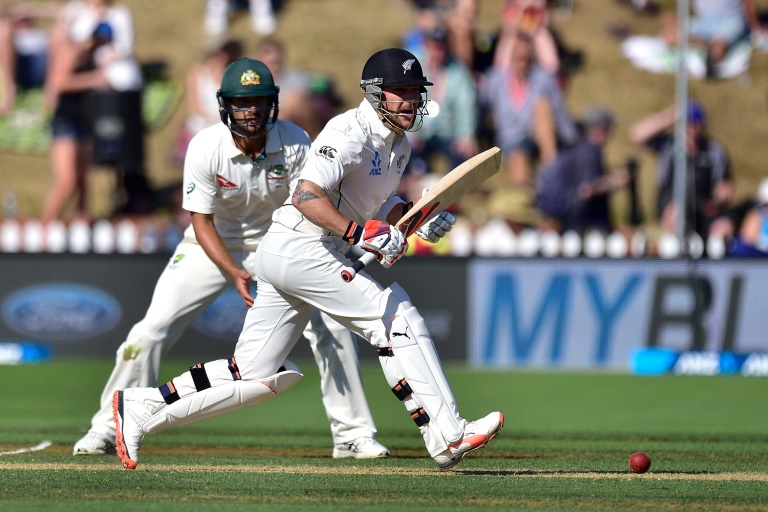 At stumps on the third day, New Zealand were 178-4 in their second innings, requiring a further 201 to make Australia bat again.

Test debutant Henry Nicholls was not out 31 with McCullum lbw to Marsh in the final over of the day for 10.

Voges’ 239 was in part testament to how docile the pitch had become since New Zealand were rolled for 183 inside two sessions on the first day.

But there were still wickets to be had, as Nathan Lyon and Josh Hazlewood found as they chipped away at the top order.

For New Zealand there were memories of being on the ropes against India at the same ground two years ago and being rescued by McCullum’s triple century.

The usually big-hitting captain was showing every sign of looking to dig in for a long stay with his 10 coming off 31 before he was out with three balls remaining in the day.

Martin Guptill (45) and Tom Latham put on 81 for the first wicket, New Zealand’s best opening stand against Australia since 1993.

Kane Williamson fell for 22 while Latham grafted away for 63 before he tried to sweep Lyon to the leg side and skied the ball in the opposite direction to Usman Khawaja at mid-off.

It was Voges, though, who ensured Australia had a firm grip on the match.

He resumed the third day at 176 and added a further 63 before his marathon 504 minutes in the middle ended caught and bowled by Mark Craig.

It was 614 runs since he was previously dismissed in the pink-ball Test against New Zealand at Adelaide in November, easily bettering the previous record of 497 between dismissals set by India’s Sachin Tendulkar in 2004.

It also settled Voges’ Test average at 97.46 from 19 innings, after being ahead of Don Bradman’s 99.94 before his wicket fell.

His double century — coupled with Usman Khawaja’s 140 — also ensured a record first-innings lead for Australia against New Zealand in an innings where six Australians failed to reach double figures.

Latham and Guptill saw off the new ball but when they looked comfortable and settled, Guptill tried to smack off-spinner Lyon out of the ground and was caught by Marsh.

Hazlewood, Australia’s chief destroyer in the first innings, tempted Williamson to prod at a ball outside off and it was nicked through to wicketkeeper Peter Nevill.

It was a chance for Nevill to make amends after he had dropped Latham when the opener was on 31.

A huge deficit is a situation New Zealand know well at the Basin Reserve, where they request a green wicket to suit their strike bowlers. But if they lose the toss, the advantage goes to the opposition.

Two years ago it required McCullum’s 302 to secure a draw against India after New Zealand trailed by 246 on the first innings.

Last year New Zealand were 135 behind Sri Lanka after the first innings and ended up winning by 193 after Williamson (242 n.o.) and Watling (142 n.o.) put on 365 for the sixth wicket in the second innings and Mark Craig spun Sri Lanka out on day five.