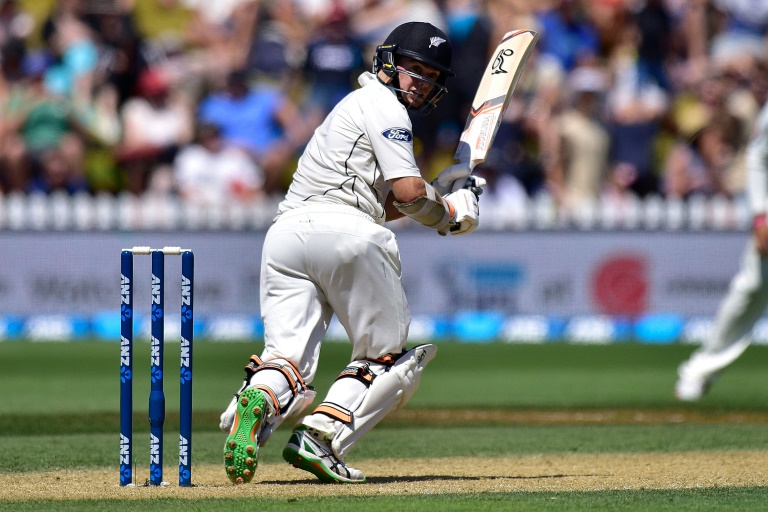 New Zealand faced a Herculean task to save the first Test against Australia as they went to tea at 106 for 1 in their second innings on day three in Wellington on Sunday.

Tom Latham was not out 43 with Kane Williamson on 17 with New Zealand still 273 runs in arrears.

Australia had firm control with a 379-run lead when their first innings ended on 562 after Adam Voges was dismissed for 239 just before lunch on day three.

With the pitch flattening out, and much more batter-friendly than when New Zealand’s first innings folded for 183, Latham and Martin Guptill put on 81 for the first wicket.

It was New Zealand’s best opening stand against Australia in 23 years.

Guptill made 45 before he looked to hit Nathan Lyon out of the ground, but his footwork was lacking and a top edge was well taken by Mitchell Marsh who had to turn and complete the catch looking back over his shoulder.

Latham had a lifeline on 31 when he was dropped by wicket-keeper Peter Nevill off Marsh’s bowling.

He nicked an attempted drive which had Nevill diving to his left and while he got glove to the ball he could not hold it.

Voges had earlier continued his exceptional form, adding 63 to his overnight 176 before his marathon 504 minutes in the middle ended caught and bowled by Mark Craig.

It was 614 runs since he was previously dismissed in the pink-ball Test against New Zealand at Adelaide in November, and easily bettered the previous record of 497 runs between dismissals set by India’s Sachin Tendulkar in 2004.

It also settled Voges’ Test average at 97.46 from 19 innings, after being ahead of Don Bradman’s 99.94 before his wicket fell.

For New Zealand, there is an element of deja vu about their situation, where they have ordered up a green wicket at the Basin Reserve to suit their quick bowlers, but then lost the toss and been made to bat first.

Last year, New Zealand were 135 behind Sri Lanka after the first innings and ended up winning by 193.

Williamson (242 not out) and Watling (142 not out) put on an unbeaten 365 for the sixth wicket in the second innings and Craig spun Sri Lanka out on day five.