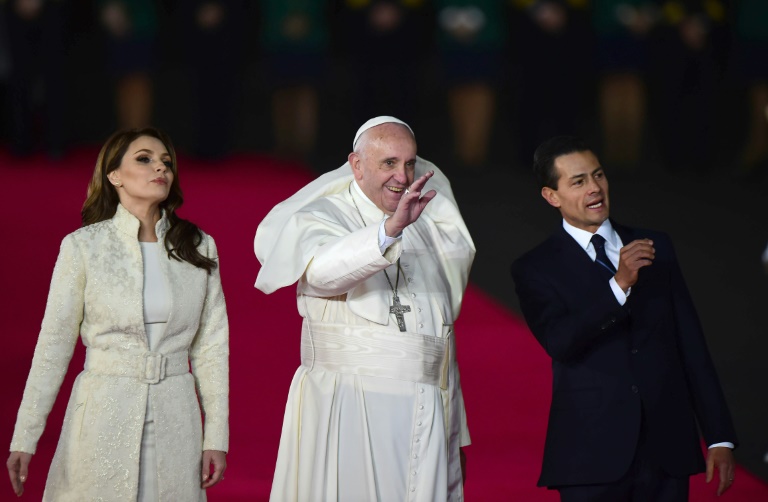 Francis will be the first pope to enter Mexico’s National Palace to meet the president on Saturday as he starts a cross-country tour that will highlight the country’s violence and migration troubles.

After hundreds of thousands of Catholics swarmed the streets to welcome him when he arrived late Friday, the pontiff will hold talks with President Enrique Pena Nieto at the ornate palace in Mexico City’s Zocalo square.

The choice of location has symbolic significance as none of the pope’s predecessors were ever invited there, even though heads of states are usually greeted at the palace.

While Mexico is the world’s second most populous Catholic country after Brazil, governments throughout most of the 20th century were militantly secular and had testy ties with the Church.

But diplomatic relations with the Vatican were restored in 1992.

The pope’s presence at the National Palace “closes a cycle,” said Mexico’s ambassador to the Vatican, Mariano Palacios Alcocer.

The meeting with the Argentine-born pontiff could also give Pena Nieto a breather from the nation’s persistent problems, like a prison riot that killed 49 inmates on Thursday or the disappearance of 43 students in 2014.

The palace meeting “offers a study in contrasts” between a popular pope and “an unpopular head of state who faces one setback after another,” said Andrew Chesnut, religion professor at Virginia Commonwealth University.

“It’s the Mexican president, of course, who has the most to gain from basking in the glow of one of the world’s most popular figures,” Chesnut told AFP.

Hours before arriving in Mexico, Pope Francis took care of another, much older rift by holding a historic meeting with the head of the Russian Orthodox Church, Patriarch Kirill, in Cuba in a bid to end a 1,000-year-old Christian rift.

The two religious leaders called for “unity,” while Francis later said they had talked about a possible program of “activities in common.”

After his meeting with Pena Nieto, the pope will make a pilgrimage to the Basilica of Our Lady of Guadalupe, a major Catholic shrine.

The basilica houses the image of a dark-skinned Virgin Mary that Catholics believe miraculously imprinted on a piece of fabric afer she appeared before an indigenous peasant in 1531.

“The pope’s encounter with Guadalupe will be monumental — he’s strongly Marian and she’s not only Queen of Mexico but Empress of the Americas,” Chesnut said.

The pope has asked for time alone to pray quietly in front of the image after the mass.

The following days will take the pope to some of Mexico’s notoriously poor and violent regions.

“The Mexico of violence, corruption, drug cartels: That’s not the Mexico that Our Mother loves,” he said days before his visit, referring to the Virgin. “I don’t want to cover up any of that.”

Many who waved at him after his arrival on Friday voiced hope that he would speak out during this trip.

“The pope should tell our leaders that they should resolve the poverty, the illegal migration, the abuse of power, once and for all,” said Rogelio Cantu, a 57-year-old lawyer.

The pope has chosen to visit regions affected by many of these problems.

On Sunday, he will lead a massive outdoor mass in Ecatepec, one of the many Mexico City suburbs hit by crime and an epidemic of murders against women.

The next day, he travels to Chiapas, the poorest state in the country, where he will preside over a mass that will be conducted in three indigenous languages and approve a decree allowing native languages at Churches.

On Tuesday, Francis goes to Morelia, the capital of the western state of Michoacan, were farmers formed vigilante forces in 2013 to combat the cult-like Knights Templar drug cartel.

He will cap his trip on Wednesday in Ciudad Juarez, the former murder capital of the world across the border from Texas.

There, he will lead a cross-border mass with hundreds of thousands of people, with the parents of the 43 missing students expected to be in the crowd.