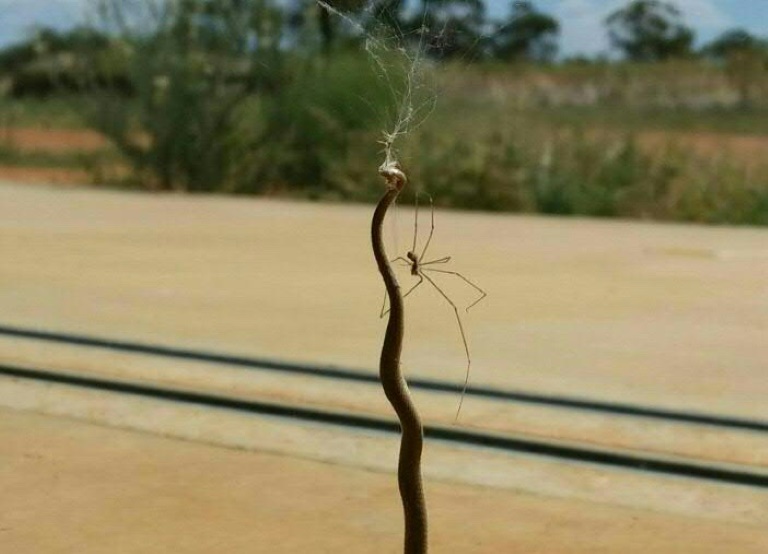 A plucky little spider has once again proved that size doesn’t matter by taking on — and beating — a much larger venomous snake, in a very Australian telling of the story of David and Goliath.

The spindly Daddy Long Legs spider appeared to have come out on top after going head-to-head with a brown snake in rural New South Wales.

Farmer Patrick Lees said he was astonished to discover the expired reptile dangling from a web at his outback home in Weethalle, about 400 kilometres (250 miles) west of Sydney, on Saturday.

“The snake was already dead, I made sure of that before I took the photo,” he told AFP, referring to the creature’s reputation for its deadly venom and quick bite.

Lees’ photo, posted on his Aussie Farmer Facebook page, has proved a huge hit in a country well known for its array of fearsome animals.

Many Australians take Mother Nature in their stride, but visitors to the vast island country marvel at its range of dangerous wildlife, from gargantuan saltwater crocodiles to the deadly Sydney Funnel Web Spider.

Brown snakes are common in eastern Australia, and can be as much as two metres (six feet) long when fully grown, according to the website of the Australian Museum.

Their bite, which delivers a potent mix of neurotoxins and coagulants, can be fatal to humans.

Lees said that after taking his photograph, he left the determined little arachnid to enjoy its moment.

“I can’t deny the spider its victory,” Lees said.

“I’m not sure if it killed it but it definitely won in the long run.”

Wildlife experts said it was possible the snake and the spider had duked it out — to the death — but it was impossible to know for sure.

“The most likely scenario is that the snake got entangled in the spider’s web,” Graham Milledge of The Australian Museum told the Australian Broadcasting Corporation.

“Usually what happens then is the spider will try to wrap the snake and then they’ll bite it.”

The museum’s website says after killing prey with venom, Daddy Long Legs spiders squirt digestive juices onto its body, before sucking up and ingesting the resulting fluids.