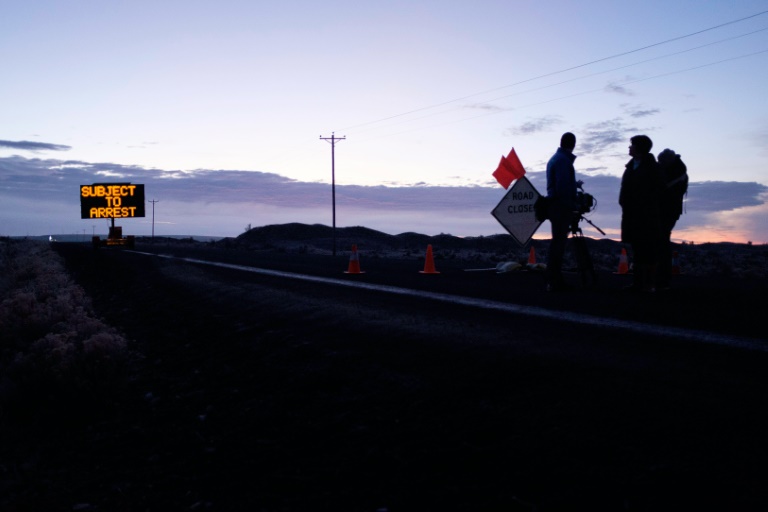 The last four armed occupiers of a wildlife refuge in Oregon turned themselves in on Thursday, ending a tense 41-day standoff over grazing rights on federal land that left one dead.

Jeff Banta, 46, of Nevada, Sean Anderson, 47, and his wife Sandra, 48, of Idaho, walked out of the Malheur National Wildlife Refuge together shortly after 9:30 am.

About 90 minutes later, the last protester followed suit, but only after vowing “liberty or death” and having threatened to commit suicide.

David Fry, in a live stream conference followed by thousands, had lashed out at the government saying that unless his grievances are addressed he would not leave the refuge. But in the end he yielded.

In a rambling diatribe, Fry at one point had said he wanted a pizza, then marijuana, before denouncing abortion and American foreign policy.

“The whole reason I am here is to protest against the government, to address my grievances,” he said.

At another point in the conversation he said: “I am actually pointing a gun at my head.”

“It’s better to die with honor (than) be forced to live dishonorably,” he said.

The Federal Bureau of Investigation said in a statement that the four holdouts had been taken into custody without incident.

It added that they would appear before a judge on Friday to face charges of conspiring to impede federal officers from performing their duties through the use of force, intimidation or threats.

“The occupation of the Malheur Wildlife Refuge has been a long and traumatic episode for the citizens of Harney County and the members of the Burns Paiute tribe,” Billy Williams, US attorney for the district of Oregon, said in the statement, referring to the native Indian tribe that regards the wildlife refuge as ancestral territory.

“It is a time for healing, reconciliation amongst neighbors and friends, and allowing for life to get back to normal.”

Cliven Bundy, the Nevada rancher whose 2014 standoff with federal authorities over grazing rights inspired the occupation in Oregon, was arrested late Wednesday in Portland, Oregon, the FBI said.

Bundy, 74, was reportedly on his way to the wildlife refuge when detained.

The remaining holdouts at the remote refuge late Wednesday had indicated they planned to surrender, with a supporter broadcasting live on the Internet phone conversations with the three men and one woman.

The live stream continued through Thursday with the holdouts reading Bible verses, singing gospel music and ranting against the federal government before they surrendered.

The siege in Oregon began on January 2 when Bundy’s son, Ammon Bundy, and some 30 followers, most of them from other states, took over the refuge to denounce federal land management policies.

Ammon Bundy was among a dozen people arrested late last month but four of his followers remained holed up at the refuge, refusing to surrender.

The group’s de facto spokesman in January was shot and killed by police who stopped two vehicles after they left the refuge.

Ammon Bundy and his supporters took over the wildlife refuge on January 2 to protest at the jailing of two local ranchers, Dwight Hammond and his son Steven, who were convicted of arson.

The Hammonds distanced themselves from the movement and voluntarily began their scheduled prison sentences after the occupation began.