Home News For Kids A ‘magical’ space-time ripple that wasn’t believed, at first 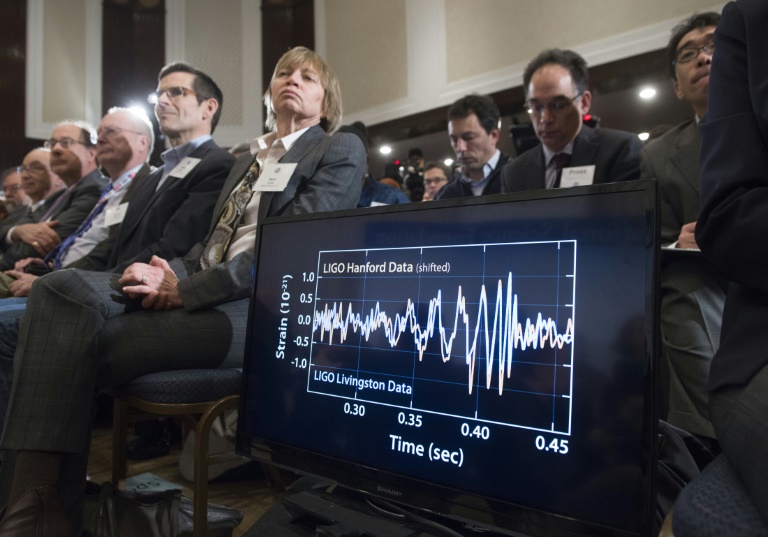 The wave that made history snuck up on them.

David Shoemaker will never forget the date — September 14, 2015 — when he woke up to a message alerting him that an underground detector had spotted a 1.3-billion-year-old ripple in the fabric of space-time.

A gravitational wave — predicted to exist a century ago by Albert Einstein — had been glimpsed directly for the first time by a pair of US-based detectors.

“It is seared in my brain,” said Shoemaker, a top scientist at the Massachusetts Institute of Technology (MIT) and head of the Advanced LIGO Project, an international effort to uncover evidence of gravitational waves.

Such waves are a measure of strain in space, an effect of the motion of large masses that stretches the fabric of space-time — a way of viewing space and time as a single, interweaved continuum.

The “chirp,” as Shoemaker described the long-awaited wave, had arrived while he was asleep.

But since the data analysis works in quasi-real-time, scientists watching the data stream early in the work day in Europe saw it immediately.

Two black holes spiraling into each other became a single black hole, and the joining of these two giants curved the fabric of space-time around them, ever so briefly.

“When the signal finally got to the Earth on September 14 we knew within three minutes that our instruments had seen something really different,” said Shoemaker.

“I was sitting at home, with a cup of coffee in my hand and opening up my email at around 7 am,” he told AFP.

An instant message had arrived from a close colleague in Germany.

The message said: “I think we are in trouble now,” he recalled.

But Shoemaker, a leading scientist in the search for gravitational waves since the early 1980s, did not leap out his chair or shout expletives.

He just took a deep breath.

“My immediate reaction was, ‘That’s fascinating. Let’s see what the instruments did wrong.'”

In fact, the team had only just turned on the pair of underground detectors — one in Louisiana and one in Washington state — for a series of final checks before formally starting the observation experiment, which would run from mid September until January.

“It was just at the beginning of this run, when we were all ready to go — to press the button to start the observing run — that the gravitational wave was observed,” he said.

“So it was a very exciting moment for us and it took us perfectly by surprise.”

Immediately, Shoemaker and colleagues began running through a checklist of possible failures.

One by one, they ruled out electromagnetic storms, lighting strikes, earthquakes, or interference by people near sensitive parts of the instruments.

Furthermore, the timing matched up.

The detector in Hanford, Washington picked up the signal 7.1 milliseconds after the Livingston, Louisiana instrument, some 1,800 miles (3,000 kilometers) away.

“The travel time of light between the two instruments is 10 milliseconds,” said Shoemaker.

“And if the two signals had arrived 11 milliseconds apart, we would have simply said, ‘Nope. It’s two instrumental defects that happened at the same time.’

“But it happened within 7.1 milliseconds, which is a perfectly plausible delay between the two.”

After many tests, the LIGO team’s discovery was confirmed.

“It took weeks before we were really gaining confidence that it was a true gravitational wave event, before I could admit to myself that something had been seen,” Shoemaker said.

“But, you know, eventually, joy sets in.”

The LIGO work is vastly different from that done by US astrophysicists who announced in 2014 they had detected the first ripples from the Big Bang, then months later admitted their indirect, telescope-based findings were premature and could not be confirmed.

Shoemaker and colleagues are using different equipment to hunt for much smaller, shorter waves, on the order of milliseconds or seconds. In other words, the kinds of gravitational waves that happen all the time, but had never before been observed.

“This is the first time there has ever been a direct detection of the gravitational waveform,” Shoemaker said.

“And that makes it a magical thing.”