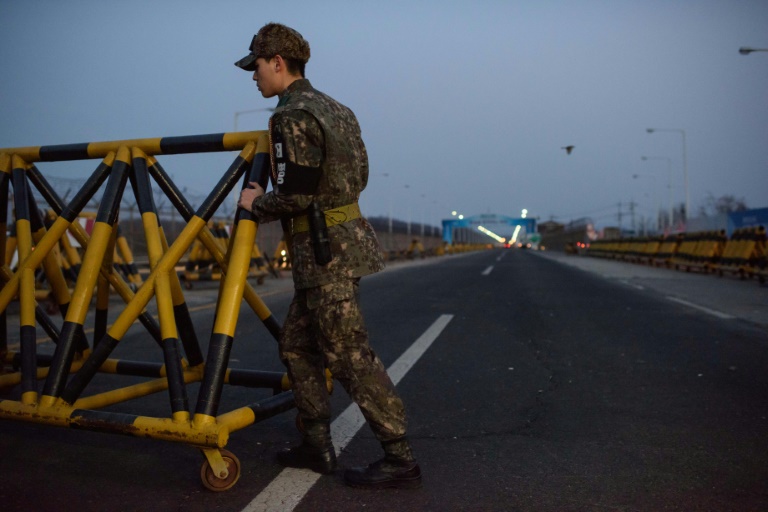 The unilateral moves, which also included Japanese sanctions, came with UN Security Council members still stalled on how far to go in punishing the North for its latest nuclear test and long-range rocket launch.

Following Seoul’s surprise decision to shut down the Kaesong industrial zone in North Korea, hundreds of South Korean trucks crossed the border Thursday morning to retrieve finished goods and equipment from the factories there.

Defending what it called an “unavoidable” decision to close the jointly-run park, Seoul said North Korea had been using the hundreds of millions of dollars in hard-currency that it earned from Kaesong to fund its nuclear weapons and ballistic missile programmes.

The move was slammed as “utterly incomprehensible” by owners of the 124 South Korean companies operating factories in the estate, who said their businesses were being destroyed by politics.

“It’s as if we’re just being ordered to jump off a cliff to our deaths,” said Jeong Gi-Seob, head of the Kaesong owners’ association.

While discussion of Kaesong has often focused on its financial importance to the cash-strapped North, it has also been a lucrative concern for many of the companies involved.

As well as cheap, Korean-language labour, they received preferential loans and tax breaks from the South Korean government, which effectively underwrote their investment.

Seoul has called on Pyongyang to ensure the “safe return of our citizens” amid concerns that the North Korean authorities might refuse to let everyone leave the park, which lies 10 kilometres (six miles) over the border.

In September 2014, Pyongyang drafted a new operational regulation — rejected by Seoul — that would have allowed the North to detain South Korean businessmen in Kaesong in the event of an unresolved business dispute.

“It would be a lie to say I’m not worried about my personal safety,” said one textile company operative, Yoon Sang-Young, as he prepared to cross the border.

“I’m not sure what the situation is like at the complex. I don’t even know whether the North Korean workers are there,” Yoon said.

The only exception was in 2013 during a period of heightened cross-border tensions when Pyongyang effectively shut down the zone for five months by withdrawing its 53,000 workers.

There has so far been no official reaction from Pyongyang to the shutdown.

Assistant Secretary of State Daniel Russel said Seoul’s move was a “compelling indicator of the seriousness with which they regard the provocative steps” taken by North Korea.

“More steps are needed to convince the (North Korean) leadership that it is not going to be possible to have access to the international economic system let alone economic or financial aid as long as North Korea continues to pursue nuclear and missile programmes,” Russel said.

The US Senate later voted unanimously in favour of expanded sanctions.

The measure, which must be reconciled with a similar House version that passed last month, would penalise any person or entity importing goods, technology or training related to weapons of mass destruction, or engaging in human rights abuses.

It also aims to cut down on money laundering and narcotics trafficking — two major illicit activities believed to be funnelling millions of dollars into leader Kim Jong-Un’s inner circle.

“This dictatorial regime must learn that its actions have consequences,” said House Speaker Paul Ryan.

Although fiercely critical of Pyongyang’s nuclear ambitions, Beijing is more concerned at the prospect of Kim’s regime being pushed to collapse — triggering chaos on China’s border.