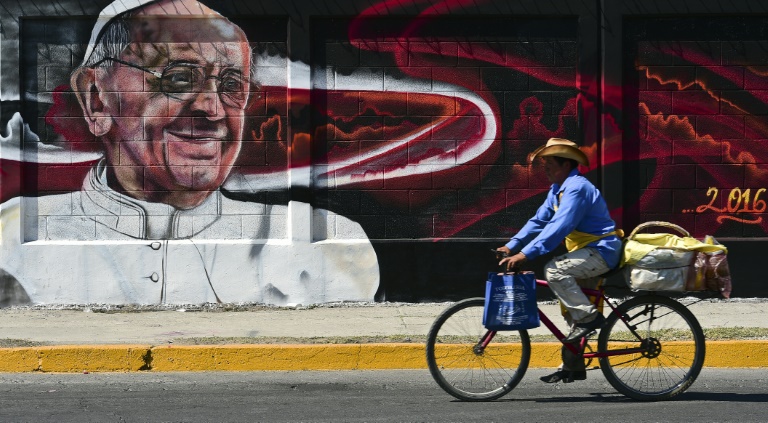 Pope Francis heads to Cuba and Mexico on Friday for a trip encompassing two of the defining themes of his papacy: bridge-building diplomacy and his concern for migrants seeking a better life.

Prior to embarking on his long-planned February 12-17 tour of Mexico, the 79-year-old pontiff will stop over in Havana for a historic meeting with the head of the Russian Orthodox Church, Patriarch Kirill.

The encounter on Friday lunchtime at Havana’s Jose Marti airport will be the first of its kind between the leaders of the two biggest Christian churches since an 11th century schism between them.

The son of Italian emigrants to Argentina, Francis was not under any pressure to go to Mexico, which was graced by the presence of previous pontiffs six times between 1998 and 2012.

But he appears to have chosen to visit Mexico because its troubled backdrop touches on many of his priority social concerns: immigration, arms dealing, the drugs trade and its associated violence, prostitution, corruption, the rights of indigenous people and the environment.

Millions are expected to turn out to welcome the the first pope from the Americas in a country of 120 million people which is home to the second largest Catholic community in the world, after Brazil.

“I want to come as a missionary of mercy and peace,” Francis said in a pre-trip video message. “I want to be as close to you as possible but in a special way to those who suffer.”

Francis will meet President Enrique Pena Nieto on Saturday prior to an early evening mass at the Basilica of Our Lady of Guadeloupe, a sanctuary dedicated to the virgin Mary which is one of the world’s most visited Catholic shrines.

Francis has said the visit there will be the spiritual high point of his visit, declaring in his video message that he plans to “bring to the feet (of the Virgin) all that I have in my heart.”

It will be the third time in his life that Francis has visited the “Morenita” (the brunette virgin), a revered icon for many Mexicans.

In political terms, the most eagerly awaited section of the trip will come on the final day, Wednesday, when the pope visits Ciudad Juarez on the border with the United States.

His journey there will be a symbolically charged affair in the middle of the primaries for a US presidential election in which the issue of immigration is set to feature strongly.

A mass has been organised close to the frontier on the Mexican side of the Rio Grande. Believers on the other side of the river, close to the Texan town of El Paso, will also be able to follow the service.

While in the region the pope will meet victims of armed gangs who control the smuggling of illegal migrants across the border.

“Already in 2014 Pope Francis raised the possibility of his entering the United States from Mexico to draw attention to the immigration issue,” recalled Jean-Pierre Ruiz, a Catholic priest at New York’s St John University.

“He will pray for the thousands of men, women and children who have died trying to cross the frontier and escape violence, political repression and poverty.”

Earlier this week Francis described his overtures to the Orthodox Church as part of a broader policy of bridge building which has also seen him controversially reach out to China, arguing that both powers can contribute to a more peaceful world.

“Bridges last and contribute to peace,” he said in an interview with Italy’s Corriere della Sera. “Walls no. They have to be destroyed not built. In any case they are destined to fall, one after the other. Think of Berlin. It seemed eternal and one day it fell.”

The pope and the patriarch are scheduled to spend two hours in a private meeting before they both give speeches and sign a joint declaration.

Russian church officials have said the meeting will focus on the persecution of Christians in the Middle East.