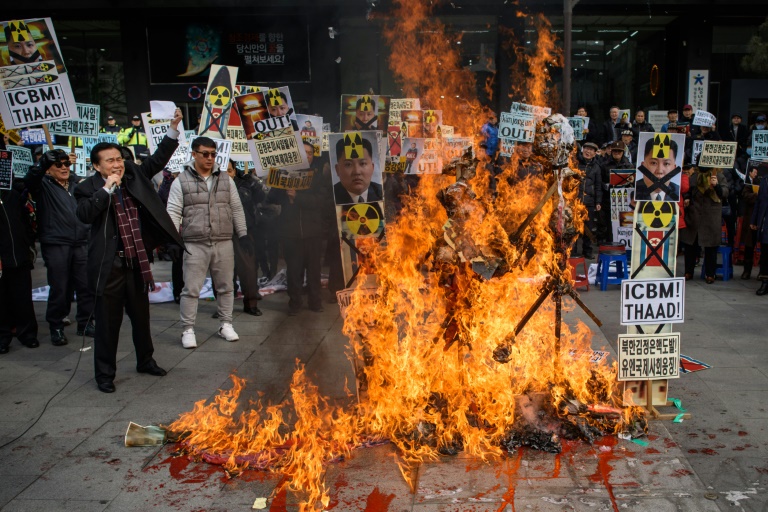 North Korea on Thursday expelled all South Koreans from the jointly run Kaesong industrial zone and placed it under military control, saying Seoul’s earlier decision to shutter the complex had amounted to a “declaration of war”.

Pyongyang said it was seizing the assets of all the 124 South Korean companies operating factories in Kaesong, which lies 10 kilometres (six miles) across the border inside North Korea.

In a key move, it also cut two key communication hotlines with Seoul, leaving authorities in the South scrambling to verify the status of up to 250 South Koreans believed to have been in Kaesong when the expulsion order was issued.

“We will make the utmost efforts to make sure that all our nationals return home safely,” Seoul’s Unification Ministry said in a statement.

But reporters near the border crossing said very few vehicles had passed back into the South.

During a previous surge in tensions over Kaesong in 2013, South Korea’s defence minister had mentioned a contingency plan, “including possible military action” if the safety of citizens in the estate came under direct threat.

The North’s aggressive measures marked a significant escalation of cross-border tensions that have been elevated since North Korea carried out a nuclear test last month and a long-range rocket launch on Sunday.

Seoul had announced on Wednesday it was closing down operations at Kaesong, and the North said it would now experience the “disastrous and painful consequences” of that action.

By shutting Kaesong, the South had destroyed the “last lifeline” of North-South relations and made a “dangerous declaration of war,” the North’s Committee for the Peaceful Reunification of Korea (CPRK) said in statement.

Relations between the two Koreas have always been volatile, but analysts said the current situation risked turning into a full-blown crisis.

“Now we can say that all strings between the Koreas have been cut and that there are no more buffers,” said Ko Yoo-Hwan, a professor of North Korean Studies at Dongguk University in Seoul.

“An escalation of tensions is inevitable, and I see further trouble ahead with Kaesong and the issues of seized assets, especially if North Korea militarises the zone,” Ko said.

All South Koreans were ordered to leave Kaesong by 5:00pm Pyongyang time (0830 GMT) and told they could take nothing but their personal possessions.

The North also said it had ordered a “complete freeze of all assets,” including raw materials, products and equipment.

The owners of the South Korean companies in Kaesong had sent more than 100 empty trucks into the North on Thursday morning in the hope of bringing out as much as they could.

Several people who crossed into the South early in the morning said they had noticed an increased military presence in Kaesong, including armed soldiers carrying backpacks and sleeping bags.

Despite the ban on removing anything beyond their personal belongings, a few trucks that managed to cross the border around the time of the expulsion order were carrying factory materials.

“No one stopped us when we were moving our goods into the truck,” said Park Seung-Gul, the manager at a textile company in Kaesong.

Defending its decision to halt operations at Kaesong, Seoul said North Korea had been using the hundreds of millions of dollars in hard-currency that it earned from the complex to fund its nuclear weapons and ballistic missile programmes.

The move was slammed as “utterly incomprehensible” by the Kaesong company owners who said their businesses were being destroyed by politics.

Earlier in the day, the United States signalled its own unilateral moves against North Korea, with the US Senate unanimously adopting a bill expanding existing sanctions.