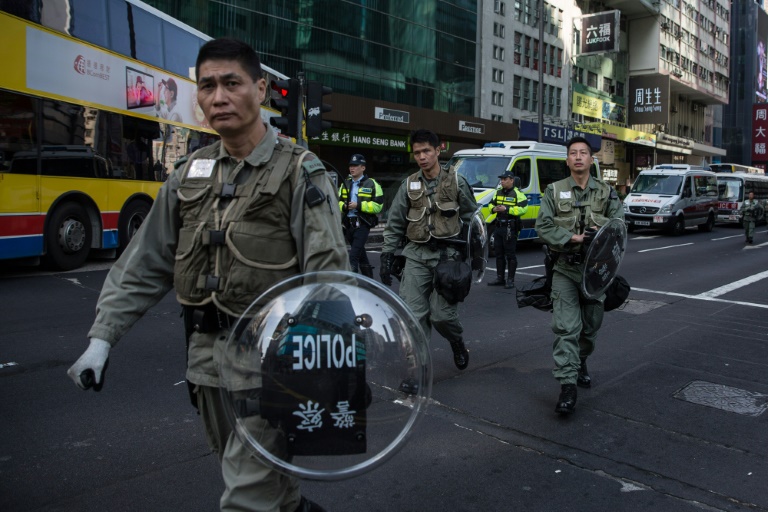 Hong Kong stocks plunged more than four percent to a more than three-year low Thursday, leading another sell-off across Asian markets and extending a global rout fanned by worries over the world economy.

Dealers continued their flight to safe investments that has played out across trading floors from Asia to the Americas this week as they fret about a possible global recession.

Hong Kong stocks — closed from Monday to Wednesday for the Chinese New Year break — slumped 4.2 percent to their lowest level since June 2012 before edging back marginally. It had already lost 12 percent by the end of trade Friday.

Selling was also stoked by concerns about riots in the city this week that saw police battle street sellers, injuring several people, which analysts said could hit tourism.

“You can’t avoid a drop because everywhere has come down so much during this time and the same concerns are still there — oil price, global recession,” Steven Leung, an executive director for institutional sales at UOB Kay Hian, told Bloomberg News.

“The image of Hong Kong as a metropolitan city has been hurt quite seriously” by the riots, he said.

There were also sharp losses on most other regional markets, with Seoul 2.4 percent down and Singapore off 1.3 percent, while Wellington, Jakarta and Manila also sank. However, Sydney staged a minor rebound on bargain-buying. Tokyo, Shanghai and Taipei were closed for public holidays.

The dollar sank against the yen to levels not seen since late 2014 after Yellen’s testimony to congress.

While she made no explicit comments on the Fed’s plans to lift rates — after December’s rise — her description of clouds looming over the US economy was taken as a hint there will be no increase in the immediate future.

“Financial conditions in the United States have recently become less supportive of growth, with declines in broad measures of equity prices, higher borrowing rates for riskier borrowers, and a further appreciation of the dollar,” she told lawmakers.

“Janet Yellen had a delicate task last night — to sound concerned enough to reassure investors that the Fed was feeling their pain, while still sounding upbeat enough to bolster the notion that this volatility will all blow over,” Sharon Zollner, a senior economist in Auckland at ANZ Bank New Zealand Ltd., said in a client note.

“The Fed has no idea how this is going to pan out either, so all Yellen could really do was ensure she wasn’t the catalyst for the lurch.”

Energy firms again felt the heat as oil prices continued to head south owing to the supply glut, overproduction and the prospect that demand is unlikely to pick up any time soon.

US benchmark West Texas Intermediate was two percent down, below $27, while Brent shed 1.1 percent to below $31. That came a day after WTI sank 1.8 percent and Brent lost 1.7 percent.