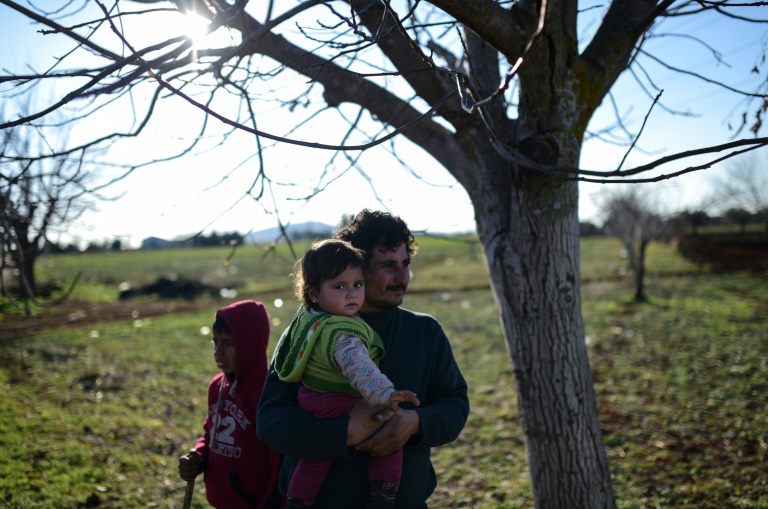 The United Nations urged Turkey Tuesday to open its borders to tens of thousands of Syrians who have overwhelmed nearby emergency camps and an end to bombings of their home province Aleppo.

“The highest need and the best humanitarian response is for the bombing to stop,” UN aid chief Stephen O’Brien said, when asked if Russia should halt its air campaign in Aleppo.

“All bombings should stop,” he said.

The main border crossing north of Syria’s second city Aleppo remained closed Tuesday, forcing huge crowds including women and children to sleep in tents or in the open.

“There are no longer enough places for families to sleep,” said Ahmad al-Mohammad, a field worker with medical aid group Doctors Without Borders (MSF).

“Most of the families left with just the clothes they were in,” he told AFP, adding that the cold and crowded conditions were causing health problems including diarrhoea.

Two days ahead of a 17-nation contact group meeting in Munich aimed at getting peace talks back on track, US Secretary of State John Kerry warned that Russia’s aerial bombardment of Syrian opposition targets could derail such efforts.

“There is no question, and I have said this before publicly, that Russia’s activities in Aleppo and in the region right now are making it much more difficult to be able to come to the table and to be able to have a serious conversation,” Kerry said in Washington.

The United Nations says up to 31,000 people have fled Aleppo city and surrounding areas since last week, as government forces backed by Russian warplanes press an offensive that could encircle the rebel-held eastern part of the city.

“We are asking Turkey to open its border to all civilians from Syria who are fleeing danger and seeking international protection,” said UN refugee agency (UNHCR) spokesman William Spindler.

“As a direct consequence of the Russian military campaign, the murderous Assad regime is gaining ground, the moderate Syrian opposition is losing ground and thousands more refugees are fleeing towards Turkey and Europe.”

Syria’s nearly five-year-old conflict has claimed 260,000 lives and displaced half the population.

On Tuesday, a suicide car bomb claimed by the Islamic State jihadist group killed at least nine people at a police club in Damascus, the Syrian Observatory for Human Rights said.

Turkey’s Deputy Prime Minister Numan Kurtulmus has said that a “worst case scenario” could see up to 600,000 refugees arrive at the border.

“Our objective for now is to keep this wave of migrants on the other side of Turkey’s borders as much as is possible, and to provide them with the necessary services there,” Kurtulmus said.

Turkey already hosts 2.5 million Syrian refugees, but has come under pressure to allow in more, as well as to prevent them from seeking to reach Europe.

NATO said it would take any request to help with the refugee crisis “very seriously”, after Ankara and Germany said they would seek the alliance’s help combatting people smugglers.

The UN’s humanitarian aid agency OCHA said on Monday that eight informal camps on the Syrian side of the border were at “full capacity”.

MSF said aid groups were distributing warm clothes and mattresses to those stranded on the Syrian side.

The UN warned that 300,000 people in eastern Aleppo city could be cut off from humanitarian aid if government forces encircle the area.

Government sieges have been employed to devastating effect against other former rebel bastions.

A report from Washington-based The Syria Institute and PAX, a peace organisation based in the Netherlands, said Tuesday that more than one million Syrians are living under siege, a tactic also used by rebel forces.

The UN’s World Food Programme said it had begun food distributions to the displaced, despite the severing of access and supply routes.

“We are making every effort to get enough food in place for all those in need,” said WFP Syria country director Jakob Kern.

They are now around 20 kilometres (12 miles) from the Turkish frontier.

The regime advances came as peace talks in Geneva collapsed last week in part over rebel anger about the government offensive.

More than 20 suspected Russian air strikes hit targets in several towns northwest of Aleppo city and in the northern countryside on Tuesday, said the Observatory, which relies on a network of sources on the ground.

Regime forces and their allies were also fighting rebels, including jihadists from Al-Qaeda-linked Al-Nusra Front, in the southwestern countryside of Aleppo province.