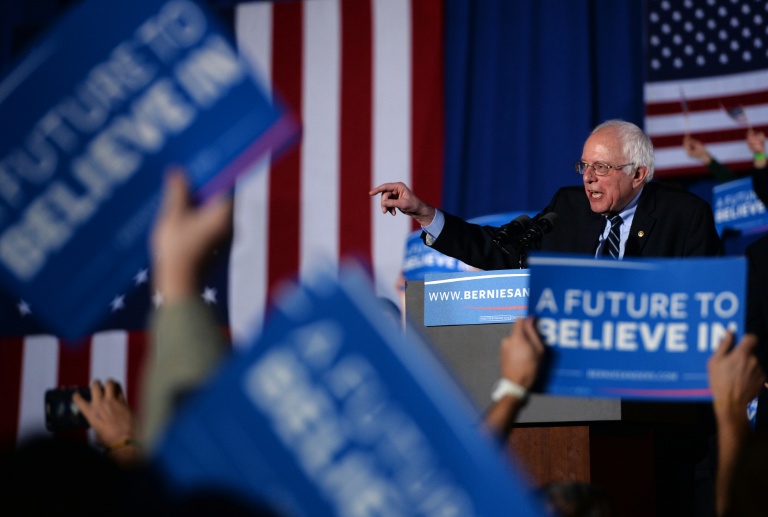 It was celebration time for Donald Trump and Bernie Sanders decisively won the presidential primaries in New Hampshire, riding a wave of anti-establishment anger in the second key test of the long, unpredictable race for the White House.

Major US networks gave the Republican Trump and the self-described democratic socialist Sanders the win, confirming a deflating if expected defeat for Hillary Clinton, who put a brave face on the loss and admitted she had some work to do as the campaign moves south.

On the Republican side, Ohio Governor John Kasich staked an early claim to second place, a potentially critical result for him as the GOP works out which mainstream candidate could successfully mount a challenge against the billionaire tycoon.

The real estate mogul, who appeared to have garnered more than double the support of his nearest rivals, did what he had to do: secure a solid win after his embarrassing second-place finish in Iowa that had called into question his showmanship strategy and his brand as a winner.

Sanders addressed a raucous crowd of supporters at his victory party in Concord, saying his primary win signaled voters no longer wanted business as usual in US political life.

“What the people here have said is that given the enormous crises facing our country, it is just too late for the same old, same old establishment politics and establishment economics. The people want real change,” he said.

“Together, we have sent the message that will echo from Wall Street to Washington, from Maine to California.”

Over at Trump headquarters, the crowd chanted “U-S-A! U-S-A!”

“We are going now to South Carolina. We’re going to win in South Carolina,” Trump said, looking down the campaign trail to the next stop.

His win reinforced his position as the man to beat on the Republican side.

“He seems to be speaking for the silent majority,” said auto mechanic Chris Skora after voting for the real estate magnate.

“A lot of us feel that way and it seems like in this day and age, we can’t say these things with the PC police all around.”

Exit polls showed Sanders winning every demographic group — a stunning result for an independent lawmaker and a potential warning sign for Clinton as she turns the campaign toward the next states that vote, South Carolina and Nevada.

“I know I have some work to do, particularly with young people,” Clinton conceded, as she recognized the American electorate’s fury with establishment politics.

“People have every right to be angry,” she said. “But they’re also hungry, they’re hungry for solutions.”

Once every four years, the nation’s eyes focus turn to New Hampshire, the small northeastern state, home to just 1.3 million people, that holds the first state primaries after the Iowa caucuses kick off the US presidential nomination process.

New Hampshire sets the tone for the primaries to come — and could whittle down a crowded Republican field as the arch-conservative Senator Ted Cruz, who won Iowa last week, and other mainstream candidates battle for second or third place.

Rubio is hoping to match or better his third-place Iowa finish, despite taking a drubbing in Saturday’s debate when New Jersey Governor Chris Christie eviscerated the first-term Florida senator for robotically repeating the same talking points.

For the past 60 years or so, most of the candidates who ended up winning the White House won their party’s primary in the so-called Granite State.

But tellingly, the last three presidents — Barack Obama, George W. Bush and Bill Clinton — were all elected despite losing in New Hampshire.

Everything was to play for in New Hampshire on Tuesday due to a high number of registered independents, who can choose to vote in either party, and the famous last-minute nature of voters here.

Exit polls conducted by CNN showed that nearly half of Republican voters did not make their final decision about whom to support until the last few days.

Trump has energized broad swaths of blue-collar Americans, angry about economic difficulties and frustrated at what they see as their country losing its global stature.

And the race could be upended yet again if former New York mayor Michael Bloomberg were to launch an independent bid. He told the Financial Times he was “looking at all options.”

On the Democratic front, Clinton failed to confound polls that for weeks predicted a large victory for her insurgent challenger Sanders, who is big on erasing economic inequality.

Clinton — bidding to be America’s first female president — won Iowa by a hair, and remains the overall favorite to win the Democratic nomination.

But Sanders’ strong performance shows his campaign, even though it faces an uphill battle, can give the former secretary of state a run for her money deep into election season.