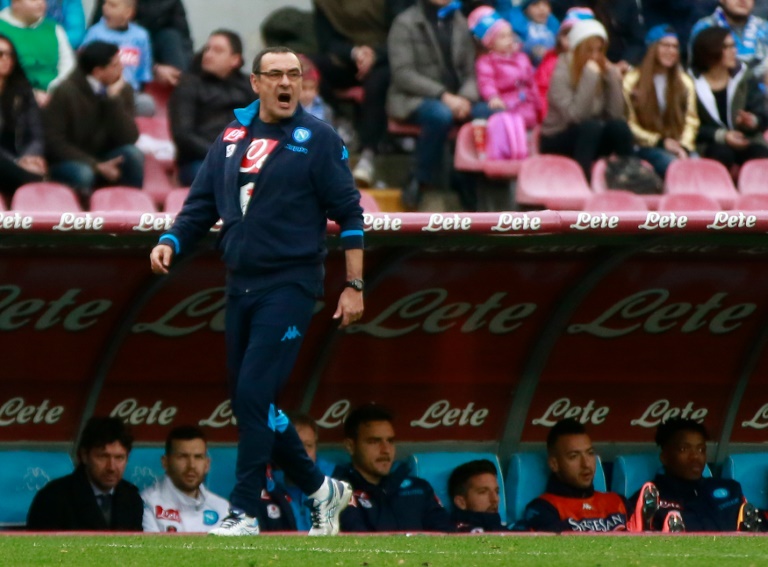 While they pore over the minutiae of what is required to win the Serie A title, there is probably little separating Napoli coach Maurizio Sarri and Juventus counterpart Massimiliano Allegri.

But when Sarri dons his ubiquitous blue tracksuit and leads Napoli on a quest to stretch their two-point lead over the champions in Turin on Saturday, the contrast with dapper Juve handler Allegri will be striking.

Sarri, who paces the touchline with cigarette in hand, is a dyed-in-the-wool Napoli fan whose arrival in the higher echelons of Italian football has been comparatively late — and somewhat unorthodox.

While former professional Allegri was helping AC Milan end their seven-year wait for the title in 2011, Sarri was just finishing a one-year stint at Piedmont-based third division side Alessandria.

Five years on, Sarri has seen years of hard work and sacrifice pay off as he stands on the cusp of ending Napoli’s 26-year wait for the title, and Juve’s dreams of a record-equalling fifth league crown.

“We are delighted and proud that Juve have to consider us as their main rivals for the title,” Sarri told Napoli’s official website. “We will go to Turin looking to make our people proud.”

If Allegri’s CV now boasts another league title, an Italian Cup and the runners-up spot from last season’s Champions League final, a glimpse at Sarri’s is more a testament to the belief that hard work and determination does pay off.

Unlike Allegri, who helped Pescara reach promotion to Serie A in 1991, Sarri failed to make the professional ranks in Italy. But his love of ‘calcio’ trumped everything else.

While working as a banker, Sarri would rush home from work, pull on his tracksuit and spend his afternoons coaching in the amateur ranks.

It took a decade for his big breakthrough to arrive, with his appointment as coach of Serie B team Pescara in 2005, although it was not until he signed for Serie B club Empoli in 2012 that Sarri began to make waves.

He led them to fourth place in their first season in charge and although losing the play-off for promotion to Livorno — the home town of Allegri — Empoli’s runner-up spot in 2014 secured their top flight status after a six-year absence.

Against all expectations, Empoli — a team of veteran journeymen and ambitious youngsters — produced an exciting brand of football that allowed them to beat a largely expected drop into Serie B and finish in 15th place.

As Allegri basked in the glory of Juve’s first league and Cup double in 20 years and a first Champions League final since 2003, Sarri was handed the reins of a top club at the age of 56 when he was appointed as Rafael Benitez’s successor.

It was a decision that, after a poor start, saw Napoli legend Diego Maradona publicly embarrass Sarri when he said: “I can’t see Napoli winning with Sarri. He is a good person but he’s not the right person for the job.”

Sarri, a lifelong Napoli fan, soaked up the criticism.

When Napoli finished top of Serie A at the halfway stage for the first time in 26 years, Maradona’s tune had changed: “If Napoli win the title this year I will fly there in a helicopter to celebrate with the fans.”

If there is real belief that Napoli can win just their third title, and first since Maradona led them to their second ‘scudetto’ in 1990, it is largely down to Sarri.

“If I’m honest, a lot of what I’m achieving at the moment is down to Sarri,” said striker Gonzalo Higuain, who has scored a whopping 24 Serie A goals in as games this season.

Yet Allegri won’t sit back and relax in a season that has seen the 48-year-old survive a terrible start before leading his men on a club record 14-game winning streak.

“When Juventus lost the Champions League final it seemed the end of a cycle, but that’s not the case: Juve are always hungry for success, it’s in their DNA,” added Cannavaro.