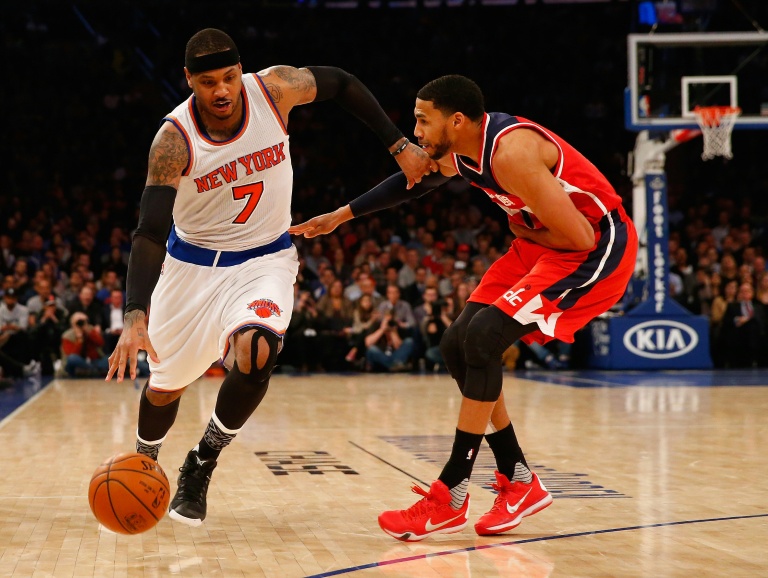 Carmelo Anthony scored 31 points but it was not enough to prevent the New York Knicks from sliding to defeat against the Washington Wizards in their first match since the dismissal of coach Derek Fisher.

Anthony drained a three-pointer with 67 seconds left to reduce Washington’s lead to 106-101 but the Wizards held on for a 111-108 victory at Madison Square Garden.

Washington guards Bradley Beal and John Wall made a series of clutch shots down the stretch to seal the Wizards win.

Beal amassed 26 points while Wall weighed in with 28 points, 15 of them coming in an important fourth-quarter cameo.

In-form rookie forward Kristaps Porzingis finished with 20 points for the Knicks, who abruptly axed Fisher on Monday to replace him with assistant Kurt Rambis.

Anthony said shortly before tip-off on Tuesday that the Knicks locker room had been taken by surprise by team president Phil Jackson’s decision to dump Fisher.

“This was something that I don’t really know if it was a quick decision or was lingering,” said Anthony.

Fisher was fired after the Knicks went on a protracted losing streak with nine losses in 10 games, including Sunday’s defeat to the Denver Nuggets.

“It’s tough,” Anthony said. “When I wrap my brain around it and put everything into perspective, it’s hard with how many coaches I’ve been through, how many players, how many different teammates.

“You just try to find some kind of consistency. The business of basketball is a tough business.”