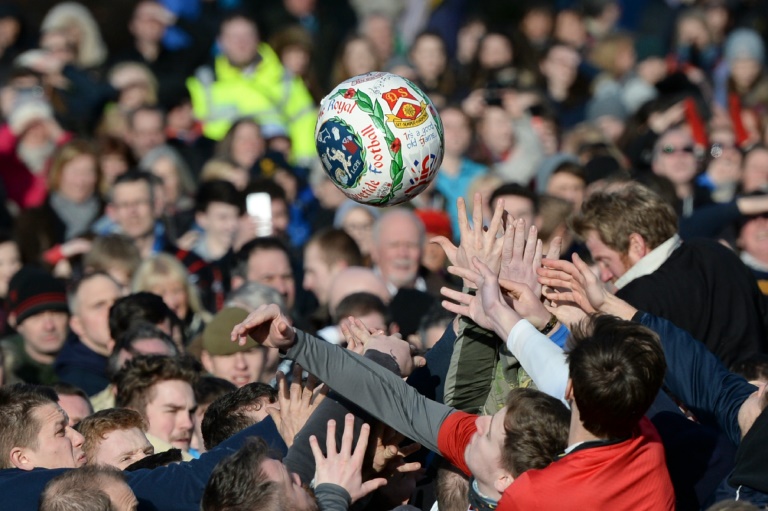 Britain’s craziest game of football unleashed chaos Tuesday as several thousand people crammed the streets of a historic market town to tussle for a ball and victory.

The Royal Shrovetide Football match is an adrenaline-fuelled tradition with roots going back to at least the 12th century — and the game has barely moved on since then.

Once a year, the town of Ashbourne in Derbyshire, central England, splits into Up’ards and Down’ards — those born north and south of the River Henmore — for a free-for-all ruck that rampages through streets and fields before ending in the water.

The riverbank goals are millstones three miles (five kilometres) apart and the few rules are straightforward: in short, no killing, no hiding the ball, and stay out of the churchyard.

The aim of the game is to “goal” the ball by tapping it three times on their team’s millstone.

This year, the Up’ards secured victory when one of their number managed the feat after three hours of play.

The contest takes place every Shrove Tuesday and Ash Wednesday, which signal the start of the Christian season of Lent.

The specially-painted ball, made of leather and stuffed with cork to keep it afloat, is rarely kicked and is mostly held in the giant rolling melee, called the hug.

The ball is “turned-up” — hurled into the crowd — to start the game.

Shops board up their windows for protection and paramedics are on standby for the inevitable sprained ankles.

The game earned the royal moniker after the prince of Wales, later king Edward VIII, “turned-up” in 1928.

One player, 54-year-old Roy Murfin, said he had suffered sprained ankles and cracked ribs playing the match over the years.

“If you do get pulled down, then they usually pick you back up,” he said. “By and large, it’s pretty good natured.”

A second game will take place on Wednesday.