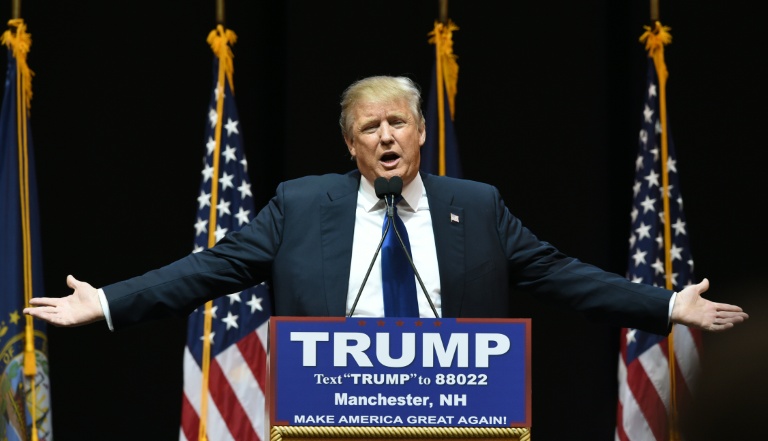 New Hampshire heads to the polls Tuesday in the crucial first US presidential primary with Donald Trump chasing victory and Hillary Clinton looking to narrow the gap with Bernie Sanders.

The small northeastern state, home to just 1.3 million, is the battleground that could shake out a crowded Republican field of candidates, pitting Trump and arch-conservative Senator Ted Cruz against more establishment candidates led by Senator Marco Rubio.

The high number of registered independents, who can chose to vote either Democrat or Republican, and the up to 30 percent undecided voters in the final days mean everything is in play.

Snow fell heavily in the state late Monday, snarling traffic and creating a last-minute obstacle for voters and candidates who braved below freezing temperatures and arctic winds.

“This is crunch time,” Trump told thousands of cheering supporters at an event delayed slightly by snow in Manchester.

“You have to go out, you have to vote, we have to celebrate tomorrow evening,” he said.

Trump has energized broad swaths of blue collar and generally less educated Americans, angry about economic difficulties and frustrated that their country appears to have lost its stature in the world.

But the New York billionaire will have to translate his soaring lead in the polls into a win if he is to recover the embarrassment of finishing second behind Cruz in the Iowa caucuses last week that kicked off first voting in the presidential nomination process.

The rest of the Republican pack has been fighting it out for a victory, strong second or even solid third-place showing that can propel them onward toward South Carolina and Nevada.

A poor result will likely rupture the White House dreams for 2016 for former and current governors Jeb Bush, John Kasich and Chris Christie.

On the Democratic front, Clinton will be looking to narrow the gap against her insurgent challenger, Senator Bernie Sanders of neighboring Vermont, whom polls predict will gallop to victory in the state.

The RealClearPolitics poll average shows the democratic socialist — who has called for nothing short of a “political revolution” — leading 53.3 percent to 40.5 percent for Clinton in New Hampshire.

Clinton won Iowa by a hair, but the senator is keen to show that his campaign, built on economic fairness for all, can give the former secretary of state a run for her money deep into campaign season.

“For all those of you who are still deciding, still shopping, I hope I can close the deal between now and the time the polls close,” Clinton told a rally at a community college.

The popular former president has hammered Sanders for his supporters’ “sexist” attacks on his wife and for peddling an unaffordable single-payer health care plan.

“Not one of the candidates are perfect,” said Robbie Grady, a retiree attending a final Clinton rally.

“In my eyes I think she’s the most qualified and she’s the person I’d like to see in the Oval Office.”

Rubio in particular will be hoping to match or better his strong third-place finish in Iowa, despite taking a drubbing in Saturday’s debate when New Jersey Governor Christie eviscerated the first-term senator for regurgitating scripted talking points.

Bush, who tangled with Trump at the debate, sharpened his attacks on the real estate tycoon, calling him unfit to be president.

“You aren’t just a loser, you’re a liar and a whiner,” Bush added on Twitter.

Trump, speaking before supporters in Manchester, then cast Bush as a “low-energy guy” who “doesn’t like my tone.”

The former reality TV star also delighted in repeating a woman’s insult in the crowd, calling Cruz “a pussy” to laughter.

Brian Carey, who runs a construction company and custom-made a neon Trump sign for his barn in his largely Democratic town, said the final campaign stop was “great.”

“He has all the experience,” Carey told AFP. “You need a businessman to run the country. The country is being destroyed right now.”

But some former supporters say they have become disillusioned with the frontrunner’s bombast and arrogance, defecting to Cruz.

“I don’t want someone representing me who’s that mean,” said Jack Jordan, a sea captain in Keene who lost his job a month ago.