Home World Behind the fun, Rio Carnival relies on discipline 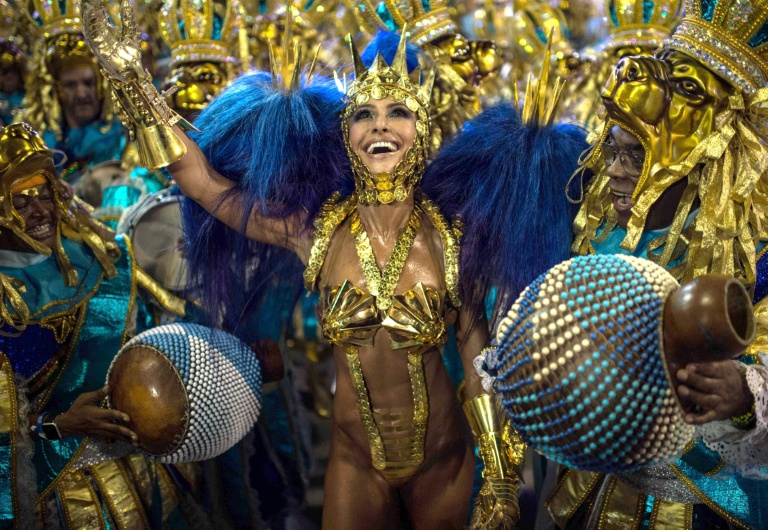 Surrounded by jaw-dropping costumes, barely there gold bikinis, and thousands of hip-shaking dancers, the one thing you don’t expect at Rio’s Carnival is a man with a T-shirt emblazoned: “Discipline.”

But out of the limelight, the dazzle, the sumptuous floats and eroticized dance routines, the likes of Paulo Roberto are the reason why Carnival has all the efficiency and precision that so much else in this vast, troubled country seems to lack.

In his unglamorous shirt, Roberto, 50, is part of a team in the elite Salgueiro samba school that simply makes sure performers show up on time, and know where to go when they do.

“We’re here so everyone stays in the right place,” he said as the school prepared for the samba championship finals Monday night in Rio’s Sambadrome stadium.

The discipline team members are there during the complex stage of setting up, they hustle along with the performers as they parade down the Sambadrome runway, and they’re there at the end to help performers find their way out.

With the Salgueiro’s 3,500-strong cast — many of them in comically ungainly costumes — six floats depicting everything from the hanging gardens of Babylon to a palace, and a crowd of 70,000 spectators, Roberto had his work cut out.

In fact, the entire samba school production is a miracle of organization that molds thousands of amateurs with self-made costumes into a spectacle that would be the equivalent of many major theaters and operas.

Unlike much else in Brazil, the parades start on time and are paced to last exactly the regulation one hour and 20 minutes. Work, though, starts at least six months before, with rehearsals, fundraising, set design, music composition and the sewing, sticking and building of the famous costumes.

The small, vital details that need attending to are countless. For example, just hours before her turn to parade with the Salgueiro, Olga Braga, 53, was still stitching her enormous red and black skirt.

“Just to reinforce it,” she said.

Nearby, teenage girls swept the floors of the floats, while men in red shirts stood guard over neat stacks of drums to be used by the ensemble’s 300 drummers.

Once the parade starts, performers run a gantlet of judges who, like everything in the samba world, are highly regulated, with scoring broken down into no fewer than 10 categories.

Under such scrutiny, merely allowing too big a gap between sections would be a disaster. Having the drummers lose the beat would be even worse. And there have been years when, because of miscalculations, a float turned out to be too big to fit in the Sambadrome.

But the trickiest time is in pre-parade assembly, said Paulo Lapa, a 47-year-old coordinator with the Vila Isabel ensemble, which was also among the finalists Monday.

“That’s when things can go wrong most easily,” he said in a crowd of performers changing into costumes on the street.

“Once we start into the Sambadrome, it’s almost automatic, because we’ve rehearsed so much.”

Leonardo Sardou, one of the float directors for Vila Isabel, said that intense preparation — usually at least once a week for a period of anything between six months and a year — is the key.

“We have almost 5,000 people involved and the main thing is that everyone has the same goal and no one does anything just for themselves,” he said.

“The parade is spontaneous, but not totally — it can’t be.”

Asked what the secret is to Brazilians’ prowess at Carnival time, Lapa said it was simply in their blood.

“Brazil’s a country of so many problems that it might seem hard to believe we can do this,” he said.

“But it’s our deep tradition.”